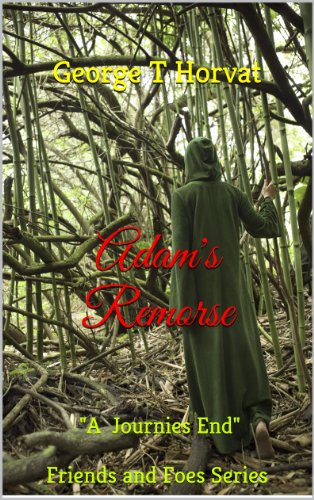 about this book: This novel is the third in "The Friends and Foes" series. The main character in this story is a Super Angle named Sah-Tee. This story is about the redemption of Adam who we all know from the bible as being the first created human being.

Upon being cast out of the Garden of Eden, Adam discreetly palmed a seed that had fallen from the Tree of Life and took it with him. God of course knew what Adam had done but decided to allow the theft, making its return the vehicle of Adam's redemption. However Adam did not know this because God had decided that its return must be of Adam's own free will.

Satan also knew of the theft for he was the mitigating force behind it and planed to force Adam to give him the seed so that he could plant it and upon eating of its fruit, have eternal life.

Knowing this God protected the seed so that only Adam could freely give it to Satan. Adam still being faithful to god for over nine hundred years kept the seed intact in a cocoon of amber. Not being able to shake Adam's faith Satan finally became impatient and decided to kill Adam and take the seed from him.

Seeing that this was about to happen God summoned Sah-Tee the most powerful Angel in all of creation to go down to Earth and save Adam and to keep the seed safe from Satan.

However, Adam could still not be told because the edict that he must return the seed of his own free will was still in force. Sah-Tee being able to convert from Angel to Human form and back by extracting a drop of living water from the crystal vial that he wore hanging from a golden chain around his neck then had to find a way to get Adam to confess of his own accord. Mostly in the guise of a human which made him vulnerable Sah-Tee then began this arduous adventure to secure the redemption of Adam which took him to many places where he encountered many humans, both good and bad in his attempt to fulfill his mission.

If you have already read the second novel in this series titled "A Cloud of Shards" then you are familiar with many of the difficulties that this Super Angel faces when trying to fulfill his missions successfully.