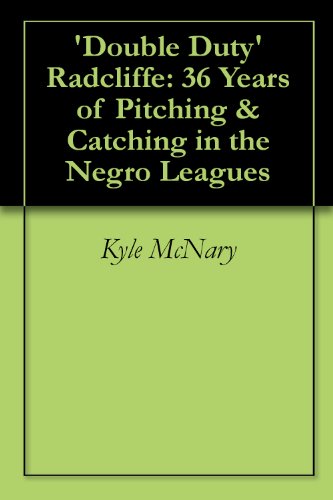 about this book: "'Double Duty' Radcliffe" was a labor of love for author Kyle P. McNary. McNary, a college baseball player and journalism student, started researching Negro League baseball in 1990, interviewed more than 60 ex-players, umpires, bat boys and fans, and spent more than five years writing the biography of Double Duty, one of the most versatile and talented players in black baseball history. Radcliffe, nicknamed because he was an all-star pitcher and catcher, played with and against every star of the Negro Leagues and Major Leagues, played 36 years with more than 40 teams, integrated two leagues in the 1940s, and played until he was 52 years old!

Career highlights include a homer to win the 1944 East-West All-Star Game, catching and pitching two no-hitters, and being named the 1943 Negro American League MVP at age 41! After baseball, Radcliffe worked as a Major League scout and promoted Negro League history until he died at age 103! Radcliffe was a great player and fantastic self-promoter, and often said, "How many men do you know that could pitch and catch? My career was special!"

Video 1: The Negro Leagues: Baseball, America, and Segregation
Video 2: Elmer Carter, the oldest living negro league player sits down and talk about a play he made in 1930, living history