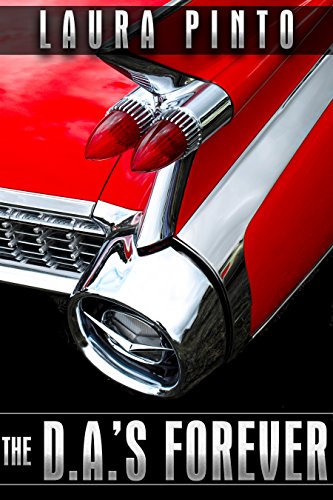 about this book: "What happens when four greasers from the '50s reunite in the '80s?" That's the tagline for THE D.A.'s FOREVER, a novel that revolves around a quartet of late-fortysomething guys who attend a special 30-year high-school reunion in their old hometown. So, what DOES happen when these guys get together? Plenty, as it turns out. Set in New Jersey in 1988, THE D.A.'s FOREVER follows the escapades of this group of friends dubbed the D.A.'s (no relation to the legal profession) as they get together for a few days of fun and nostalgia and end up coming to terms with the realities of their diverse lives.

The action begins with Eddy Steinberg, one of the guys, preparing to drive two hours from home (without his wife in tow) to meet up with his old friends and classmates and to stay in town for the duration of the designated Fifties Week. His plans are benign enough. What could go wrong? Plenty, as it turns out. The four men meet at an afternoon "picnic" on the school grounds, and later at a formal dance. But it doesn't take Eddy long to feel like the odd man out. The inevitable changes have come with the passage of time; the guys are no longer carefree teenagers, but four men pushing fifty with jobs, families, and responsibilities. Among them, they have three wives, thirteen children, and two ex-wives (but no partridge in a pear tree). Despite this, the word "discretion" has not found its way into their vocabularies, and their total lack of restraint in their respective personal lives is alarming to Eddy. Frankie D'Antonio, the 48-year-old founding member of the D.A.'s and the other main "voice" of the third-person narrative, is, in Eddy's opinion, "a teenage greaser who had never grown up." He's also quite the ladies' man, complicated somewhat by the fact that he's very much married. So is Tony Franklin, Eddy's best friend, a serial cheater who finds himself reunited with the high-school sweetheart he hasn't laid eyes on in twenty-five years. Denny O'Reilly, Frankie's best friend, is divorced from his second wife and actively (and enthusiastically) dating on the heels of a massive weight loss. Denny's main source of concern in life is his 20-year-old son, Sean, who "ain't too swift with the chicks," and he's quite vocal about sharing his concerns with the boy and giving him advice on how to score. (What could go wrong?)

Eddy is the only member of the D.A.'s who never found it necessary to run around on his wife, and the antics of his friends bother him. He soon realizes that the D.A.'s have grown apart, even if it takes the other guys a little longer to catch on. Worse, Eddy finds himself attracted to a young woman he meets at the reunion festivities, and for the first time in his married life he's facing a tangible temptation: The girl's quiet innocence and purity instantly transport Eddy back to his youth, a time when life was much less complicated, and it doesn't take long before his emotional stability and his very marriage are threatened. As if all this weren't enough, Eddy feels that the other members of the D.A.'s are silently challenging him to throw caution—and his morals—to the wind and violate his matrimonial vows as casually as if he were changing his clothes. Unbeknownst to Eddy, all of the other guys are facing issues of their own, and there are some surprising twists as the story develops. THE D.A.'s FOREVER is, first and last, a story about enduring friendship. It addresses everything from love to anger, from lust to romance, from fidelity to infidelity, and—most tellingly—from youth to middle age, and in the process takes the reader on a nostalgic journey to the 1950s via the 1980s. It's part comedy, part drama, part satire, by turns funny and touching; it's raunchy and sexy at times, romantic and sentimental at others. It's a story of old love, of new love, and of a love that will never die. (Note: THE D.A.'s FOREVER contains strong language and sexual situations and is intended for mature audiences only.)