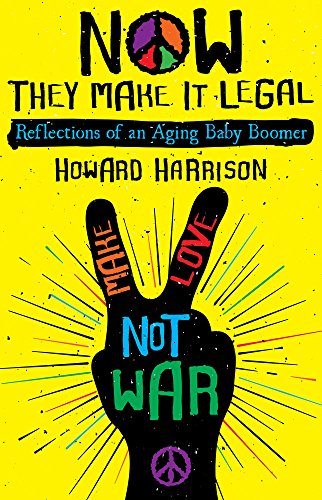 Book: NOW they make it legal - Reflections of an Aging Baby Boomer by Howard Harrison

about this book: "NOW They Make it Legal: Reflections of an Aging Baby Boomer" takes readers on a nostalgic tour of the 1950s, '60s and '70s through the eyes of one of the 80 million people born in the United States between 1946 and 1964. It was the greatest period of population growth in U.S. history, producing a generation that will find much to relate to in this book's 124 pages.

"McDonald's. Fish sticks. Disneyland. Coke in cans. These are just some of the American institutions that debuted the year I was born, 1955," writes the author in the book's introduction. "Legos and Velcro were also invented that year. Guinness published its first book of world records. Bill Gates and Steve Jobs were born. And in December, just weeks before my birth, a black woman, Rosa Parks, refused to give up her seat to a white man on a bus in Alabama – and many people cheered."

"NOW They Make it Legal" focuses on the author's experiences during those turbulent years while mixing in details of the news and events that shaped the lives of Baby Boomers. The book was named a 2016 Reviewer's Choice by the Midwest Book Review, which called it "a fabulous, firmly tongue-in-cheek tour of bygone decades. Award-winning journalist Howard Harrison has crafted a memoir so vivid it's the next best thing to a time machine. These anecdotes will enlighten, startle, perplex, and inspire readers of all generations."