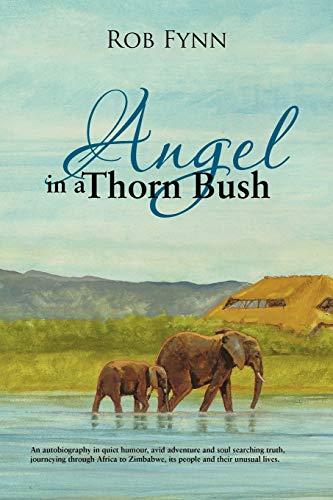 Book: Angel in a Thorn Bush by Rob Fynn

about this book: Join Rob Fynn in Angel in a Thorn Bush as he recounts his life as an African adventurer and recollects the exploits of his ancestors. While Napoleon marched around Europe, Rob’s forebears arrived in Cape Town and befriended Shaka, chief of the Zulu, before finally settling in Rhodesia, which became today’s Zimbabwe.

The story will take readers to see the good, the bad and the ugly of the colonial occupation and the ‘free’ Africa of today. This is accompanied by deep insights and first-hand experience of living and fighting to survive in an extraordinary continent that continues to baffle the world.

Living in the beautiful, remote Zambezi valley throughout the entire country’s turbulent ‘freedom fighter’ war years, Rob and his wife, Sandy, pioneered the first big safari lodge in Zimbabwe – Fothergill Island on Lake Kariba – where they brought up their family of three daughters.

Readers will laugh and cry, and discover through escapades that stretch the imagination how ‘doing your thing’ isn’t always smooth sailing in a world where angels fear to tread, and where thorn bushes wait to entrap the unwary.

This took 6 years in the writing - rewritten 7 times in rephrasing such a personal story. On the face of it, Angel in a Thorn Bush is presented as the autobiography of a white African who runs safaris in Zimbabwe. That in itself is an interesting enough story; but what the reader actually gets is much more than that. The manuscript is not just a life story but also a personal perspective on the history of European involvement in Africa over the course of two centuries.

The author's ancestors first came to southern Africa in the early 19th century, and have played a role – sometimes a prominent one – in the history of European settlement of the continent ever since. Among those early ancestors was the extraordinary Henry Francis Fynn, one of the party of adventurers who founded the town of Port Natal, which later evolved into Durban. (Fynn was a doctor who saved the life of the Zulu King Shaka after an assassination attempt by one of his own people; this act helped open up Zulu lands to white access and settlement. The full story is told in the manuscript.)

The author is the sixth generation on from Francis Fynn, and the third generation to have lived in Rhodesia/Zimbabwe. As soon as you begin reading his manuscript, you begin to realise that he has a knack for storytelling which is rare in autobiographies by non-professional writers. Rather than beginning (as most amateurs do) with a linear account from birth onwards, what we get here is a thrilling opening scene involving a narrow escape from a charging elephant, which shifts skillfully to the point where the author, 'green and dripping as a newborn impala', waded into the business of running safaris in what was then Rhodesia.

It's an enjoyable narrative, spiced with the author's wry humour, but what really makes it fascinating is the background – the relatively lighthearted personal stories contrasted with the lethal guerrilla fighting that was going on in Rhodesia during the early years of the safari venture in the 1970s. Throughout the memoir, the narrative deviates periodically from the chronological line, artfully using memory triggers to introduce expansive elements such as the author's family history, the related politics and the recent pattern of persecution of white farmers under the Mugabe dictatorship. It's a fascinating story filled with the touch-and-go, seat-of-pants incidents and situations common to pioneer tales, as well as intelligent and very well-informed accounts of politics at the high diplomatic level and on the ground. The descriptions are vivid and blunt:

The prose is of the no-nonsense, heavily masculine kind: blunt, plain and economical to the point of terseness. When you think about it, this is exactly the form of expression you would expect from a man who has lived the life this author has, in which communication tends to be stripped down to its essentials. As such, it conveys a strong impression of character; moreover, it is ideally suited to the description of fast-moving incidents. Elsewhere, especially when it comes to visual elements like scenery, as well as the author's emotional inner life, some readers might find that it lacks descriptive power. Hopefully you are not one of them, though; imagination is quite capable of filling in the textures, and the bare-bones prose is very good at providing a feeling of authenticity which stimulates the imagination.

In one respect at least, the author supplies the emotional charge in abundance; this is in his account of his relationship with his wife, Sandy (or 'Sands' as she is often called). Their initial romance, tied into the glories of the African wilderness, is warmly described, and their subsequent marriage, separation and her eventual passing from this earth are narrated with real depth. In fact, it seems that this is where the author made the major emotional investment of his life, and he has therefore (consciously or unconsciously) made the relationship the narrative centrepiece of his autobiography. Whether that has been his intention or not, this is how it works. This core relationship serves as a unifying thread throughout the story, lending emotional engagement to the working safari environment, tragedy in later chapters, and eventual dramatic closure. Assuming this is a deliberate use of dramatic structure, it is very skilfully done.

In conclusion, then, Angel in a Thorn Bush is an unusually interesting and enjoyable autobiography. Vibrantly, robustly narrated, intelligently structured for dramatic effect, and packed with informative detail about the wilds of Africa and political history, it makes an enlightening and highly readable story.