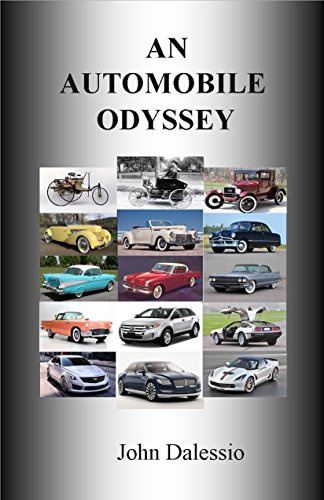 about this book: An Automobile Odyssey is an autobiography with a brief history of the automobile industry from the early horseless carriage days, through the decades, with a glimpse into the future.

The history of the automobile reflects a worldwide evolution that took place over 130 years. Much has been written about America's love affair with the automobile. I fell in love with cars at an early age. It was easy to fall in love with my first car, savoring the freedom that it would bring to my teen life. The exhilaration of driving to distant places and discovering what life was about in my youth would be something that I will remember always.

My story began when I was born the son of Italian immigrants who achieved citizenship and was the youngest of five siblings by fifteen years. I was raised in a comfortable but modest environment in a small town in southern New Jersey and the only one of five to graduate high school.

My father, was a tough old country Italian who taught me something very valuable – the work ethic. I became aware of the moral benefit and importance of hard work and its ability to strengthen one's character. Little did I realize back then as a teenager how far the work ethic would take me going forward.

When I look back on my forty-seven years in the auto industry, I can recall my humble start as a parts counterman in a NAPA Auto Parts store. I was later hired as a Parts Manager for a local Lincoln-Mercury dealership. The job was a beginning that helped me to launch a highly successful career in the automobile industry. After managing the parts department for a year, I became an automobile Salesman, later was promoted to Sales Manager, then moved up to General Manager. The wealth of experience I had successfully accumulated in six years with a new car dealer operation had prepared me to go out and establish own dealerships.

In 1913 Henry Ford built the first moving chassis assembly line producing an affordable car for the masses. Fast forward to 2017 and the automobile has evolved into a powerful stylish comfortable vehicle powered by turbo-charged engines, hybrid power, all-electric and hydrogen power.

We are soon entering an era of new technology with autonomous or self-driving cars What will the future hold for automobiles?

Let me tell you about An Automobile Odyssey . . . .