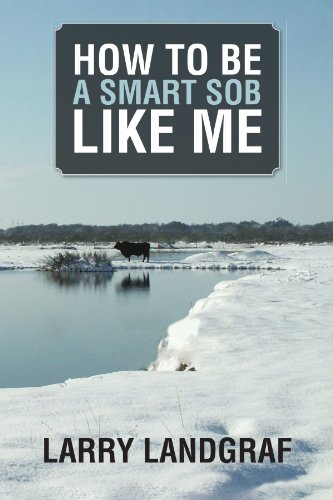 Book: How To Be A Smart SOB Like Me by Larry Landgraf

about this book: I have a decent education, 16 years worth, but I think I learned much more by working for myself for 40+ years. I am smart in so many ways, but I am also a son-of-a-bitch as well, according to many. My Smart S.O.B. book is partly my autobiography, and it is partly a self-help book for those stuck in a rut and wanting a better life and happiness. I claim to be the happiest person on this planet. Life does not always go as planned, but I am happy most of the time. Want to know why? Read my book. Want to know why I am also considered a S.O.B. by many? Read the book. I will tell you a little of why now though. I don't take crap! There is a lot of crap in our government and way too many stupid people on this planet. I got fed up one day and started writing. The result is this book. I have been very vociferous about some of the crap that goes on around here, and I have rubbed a lot of people the wrong way, mostly judges, cops and other elected officials.

The cover of the book came from a photo I took of my bull on Christmas Day in 2004 in the pasture in front of my home. It snowed eight inches during the night and we had a white Christmas, probably the first in centuries. Here in south Texas it never snows; maybe one good snow about every 50 years or so. The last good snow was when I was about nine years old (about 1957). My thought at the time the photo was taken was that the bull was saying "where the hell did all the grass go?" Also, I feel that I am a lone bull, especially when fighting government and all the crap that goes on in court rooms all across this country. I decided it would make a good cover for my book.

Everything I wrote about in this book was from memory. This book did not sell well, but I did not promote the book as I should have, but I couldn't afford it at the time, but mostly I didn't know how. My current book, Into Autumn, is a much better book according to many and the reviews are good. I have also learned to promote better, and I'm promoting Into Autumn as hard as I can. I also thought that I may as well promote the S.O.B. book too. I think it is a good book. It may rub you the wrong way, but I don't care, I am a S.O.B. remember? It will tell you a lot about me though. Maybe a little more than you want to know. It is educational and I hope you can learn a few things as well, other than just about me. I put my heart and soul into both books. Both books should stir some emotions in you. Isn't that what books are supposed to do?

Video: How To Be A Smart SOB Like Me By Larry Landgraf