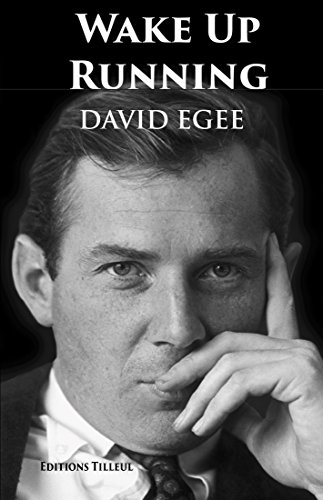 about this book: David Egee had to wake up running to live his dream of working and traveling throughout the world. ADHD as a child, Egee suffered through many years of reading and writing impairment. "I was ADHD before the expression became a household word."

Egee overcame this learning handicap to become the Director of the American Hospital in Beirut at the age of 35, dealing with such Middle Eastern luminaries as Yasser Arafat and Muammar Gaddafi, at one time smuggling PLFP Founder Dr. George Habash into the hospital into the hospital for a secret operation. He also negotiated treatment for Fatah PLO commandos in exchange for blood donations for the beleaguered hospital. Later, working out of Dubai, he established hospitals throughout the Middle East (Libya, Saudi Arabia, Iran), just before the region exploded and he had to be evacuated to Italy after the crowd stormed the American Embassy in Tripoli.

In the 1980s, he worked for Hospital Corp. of America (HCA) in England, setting up hospitals and nursing homes. When HCA bowed out of Britain, he founded his own nursing home company, eventually setting up and staffing over 50 homes in the UK.

From there, he went on to create and own a string of nursing homes in England, finally selling out at age of 68 and retiring with enough money to take care of himself and his family and live comfortably for the rest of his life.

Wake Up Running contains a lifetime of memories from the 1940s through the 2000s. Anyone interested in Middle East History will be captivated by Egee's account of a turbulent era and see is as the precursor to today's Middle East conflicts. In fact, the conditions in modern Libya and Lebanon can be understood in the light of Egee's experience in the 1970s.

"I was raised in Newtown, CT, a small, idyllic New England rural farming community 60 miles from New York City. In the 1950s, Newtown was evolving into a residential and light industry area for middle and upper-middle class people starting new families. There were just enough rich upper class New Yorkers creating "second homes" to give the town an air of exclusivity. It was a Saturday Evening Post magazine-cover community with all the Norman Rockwell characters you can imagine, a far cry from the infamous Sandy Hook Elementary School shooting that took place in 2012, 76 years after I was born there.

"By my 3rd year in school, I began to realize that I was not the smartest student in the class. John Verdery, the headmaster of the Wooster School described my deficiency in his book, 'Partial Recall: The Afterthoughts of a Schoolmaster,' 'David was the dumbest student we ever had at the school.' This refrain was echoed throughout my educational career. Fortunately, Verdery believed in me as a person and acted as one of my mentors.

"Later on, I consoled myself in the belief that you don't need to be too intelligent to be educated, and you don't have to be educated to be successful. You just have to work harder and ' Wake up Running.' I believe I was genetically attuned to challenges. Education was a challenge – a difficult task, but I got through it.

"I wrote Wake up Running because it was a challenge and because it was there to write. Once, after I finished telling my daughter about negotiations with Yasser Arafat, my experiences in Libya, and the day that Muammar Gadhafi distributed his 'Green Book' to every single individual living in Libya, and announced that Libya was now a Jamahiriya, she asked me, 'Pappy, why don't you write these stories down?'"