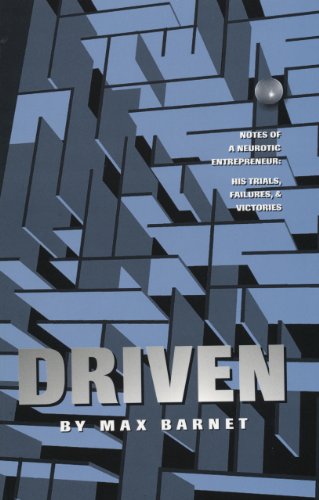 about this book: THE "UNCATEGORIZABLE" NOVEL

Some years back I had sent the manuscript of my autobiographical novel DRIVEN to a successful New York literary agent that had sold CHARIOTS OF FIRE. Shortly afterwards he phoned to tell me that he had just finished reading the MS throughout the night; he simply couldn't put it down. Ah, I thought, "I've written a winner."

"But it has a problem. It doesn't fit into any category," he added.

"Well," I replied, "Would you be willing to try a few publishers to see whether they'd be interested."

He agreed to send the MS to a half dozen publishers with whom he had a good relationship. But he warned: "I don't expect that they will take it on."

Much to his and my disappointment he was right. All six publishers rejected the MS because it was "uncategorizable." Being outraged, and believing that DRIVEN deserved a chance, I self-published the book and sent copies of it to professional reviewers as well as to several people in business whom I believed would give me an honest critical appraisal.

The reviewers raved about it, as did the people steeped in business. Yet I came to doubt its worth, allowing its inventory to just sit and mellow. Now years later, having forgotten the details of what I wrote and specifically how I had written the story of my business experience, I reread the work. I realize again that it deserves to be read by a broad audience, by anyone connected to a business, from employees to CEOs, and not surprisingly by families of business people who have heretofore failed to comprehend the rollercoaster ride that a life in business involves.

I am trusting that you are willing to clear the arbitrary "uncategorizable" hurdle and prove that view wrongheaded. DRIVEN, if given the right chance, I predict will be a hit.