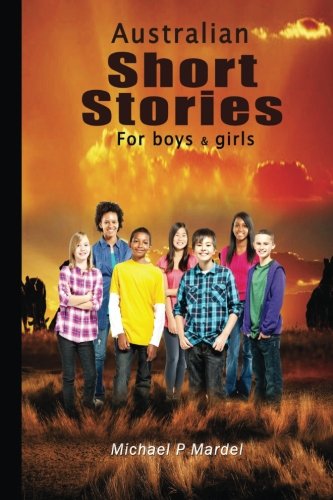 about this book: This book is a series of ten short stories which Michael wrote and had critiqued over two years. Michael was inspired to write the stories after having written similar ones over the years and a section from one was written during the November write-a- book month. One story was inspired by a great-grandfather's diary and another by watching the tennis at Monte Carlo.

The primary readers are boys aged 10-12 who are reluctant readers. The stories were easy to write and the only strenuous part was cutting them down to around 1,500 words.

I researched online and at the local library to work out distances for travel out of Melbourne for the goldfields story as well as the length and width of tennis courts. I also found out more about how one could get to the Masters by bus even though I have been to Monte Carlo.

I have been to Portsmouth, climbed over a ship from Nelson's time with a guide, and bought a book which added to what the sailors used for their meals.

I saw a painting of a girl in a red dress in a museum out of Melbourne in the wineries. She was skipping down the lane so I wove that into a story of the same name.

I had a dog called Trixie and this is her caravan journey.

I learned that there is always more to learn and I hope young boys will enjoy the adventures of the characters in the book who are all 12 years old.