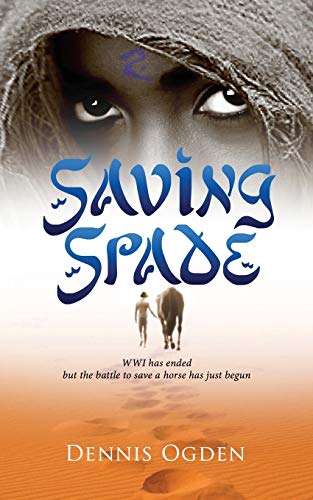 Book: Saving Spade - WWI Has Ended But the Battle to Save a Horse Has Just Begun by Dennis Ogden

about this book: This is a story that will remind people – more so Australians – of the injustice towards the horses of the Australian Light Horse who were left in Egypt at the end of the First World War. After years of carrying their riders into fierce battles, that included the famous charge at Beersheba, they were refused to return to Australia. The bond between these horses and those who rode them should never have been broken. Many troopers chose to shoot their own horses rather than leave them to be mistreated or butchered for food. An act that would break any hardened troopers heart.

My story is about one particular Aboriginal trooper who reared his horse, Spade, on a cattle station in the outback of Australia and refused to be parted. With the prospect of being charged a deserter, he plans to ride Spade into the Sinai Desert and find a new life together.

This is a story of fiction but told with respect for those who were involved and the many heroic horses. 'Walers', they were called.

My understanding of the Australian Light Horse, and a source of research, came with my association with author Ian Jones who wrote "A Thousand Miles Of Battles', a history of the Light Horse in WWI.

For those who are unaware of the Australian Light Horse and the charge on Beersheba, I suggest some reading to get a sense of the heroism and sacrifices of both horse and rider. For horse lovers alone, they will understand the bond I want to portray.

While initially written for the Young Adult reader, I have found the age of readers to be anywhere up to 90+.