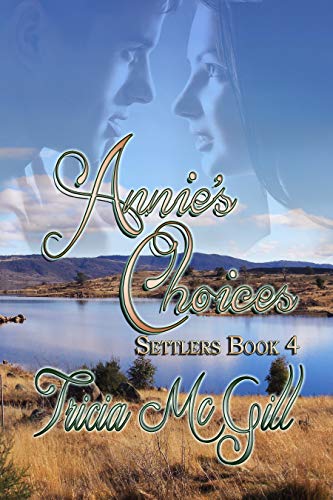 about this book: When I finished Challenging Mountains, Book 3 in my Settlers Series, I thought that was the last about the Carstairs family. I told Tim's story (Challenging Mountains) and always intended that one would be the last. But as so often happens, Tim's sister Annie kept nagging at me to tell her story. Fellow writes will know just what I mean when I say a character is telling me (Usually in the early hours of the morning) that I must get her story told. I guess it was only natural in a way, as I knew the Carstairs clan inside out having been with them since Bella arrived at Sydney Cove on a transport ship way back in 1818.

Annie is 18 at the start of her story in 1843. Having spent all her life until then out at Bathurst west of Sydney on the sheep farm owned by her Pa, Tiger, she is still naive in the ways of the world, yet forthright because of her upbringing. She decided to stay with her brother Tim and his wife Jo down in Melbourne after a visit with her Pa and Mama. There she meets Jacob, who works as a carpenter for her brother. Some of Annie's choices turn out to be not so great, especially the biggest one of all where she makes the wrong decision about the two men who come into her life.

Many changes have occurred in the fledgling colony in the 25 years or so since Annie's Mama first set her feet down on solid land as a prisoner of the crown. My main aim in this, the final in the series, was to go full circle and take the family back to where it all began.