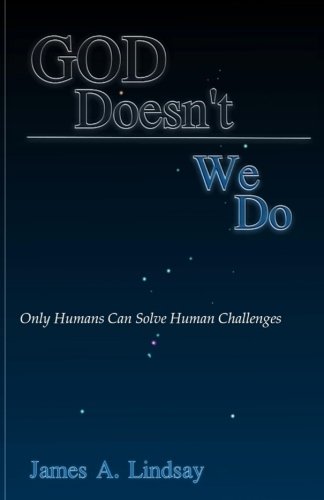 Book: God Doesn't; We Do - Only Humans Can Solve Human Challenges by James A. Lindsay

about this book: The central theme of God Doesn't; We Do: Only Humans Can Solve Human Challenges is captured by the title and subtitle, but that theme doesn't do justice to the arguments contained within it. Most notable among these are an appeal to spirituality that relies upon no religious beliefs or mysticism whatsoever and a philosophically solid argument that we can claim that the probability that God exists is zero, "almost surely," which is a precise term drawn from my expertise as a Ph.D.-level mathematician.

As a highly educated atheist living in the Southeast, I was compelled to write this book after watching too many of my friends and neighbors openly embracing ignorance that they justified with their religion. In fact, "Thank God I don't have to be educated because I am a Christian" was the statement that motivated me to write it in the first place, and it is the statement that the introduction of God Doesn't; We Do revolves around.

The book itself is well researched and carefully analyzes historical and philosophical arguments surrounding belief in the major monotheistic religions, and it uses the same level of attention to detail to appeal to current events that indicate the ongoing nature of some of the problems outlined by the belief that God is a being that does things for us.

The book is primarily intended for intelligent readers who have religious beliefs and yet serious doubts about those, as well as for atheists who wish to understand the various arguments for and against the existence of God on a deeper level. It's main social thrust is that the religions, if they want to carry on in our modern, secular world, have a responsibility to harmonize themselves with modernity, part of which requires the admission that God doesn't; we do, and that only humans can solve human challenges.