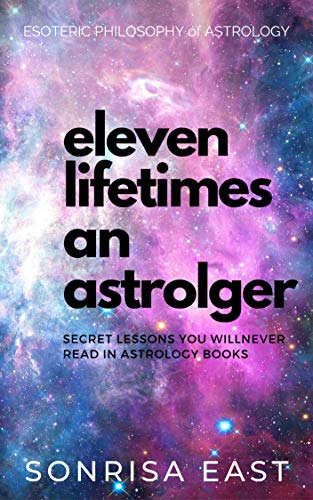 about this book: This is not an ordinary astrological cookbook. It's a totally different take on astrology that insists we must look backwards in order to move forwards.

Sonrisa East takes us through mankind's deep history, past our galaxy, and then circles into the future of humanity, including the possibility of birth on other planets. Most astrologers haven't considered what changes to humanity a human birth on a planet with 62 moons might cause. But after you read this book, you will.

This book wraps new information from cutting edge astronomical research we've only learned in the past five years around ancient history and mythology in a delightuflly intriguing way.

Eleven Lifetimes an Astrologer will make you think about astrology in ways you have never considered. It will test the boundaries of your knowledge—and belief—in an attempt to "stretch your eyes enough for them to grow."

Designed as a practicum for the fledgling seer, it is filled with concrete exercises of Backwards Gazing to lay the groundwork for Forwards Seeing, it may well become the definitive guide to the Art and Duty of a Visionary.

If you take nothing away from reading it but the Seer's Creed, it is well worth the read.

Eleven Lifetimes an Astrologer just may change how you see, and how you use, astrology forever.

Sonrisa East is a transformational astrologer and seer currently living in America. She has studied Western astrology for 56 years and is deeply comtemplative both in Vedic and ancient Celtic astrology.

In addition to Eleven Lifetimes an Astrologer, Sonrisa East is the author of a four-volume series entitled Reading by Symbol Light that looks at the historic past of constellations, mythology of the night sky, cutting-edge scientific knowledge gained from recent space probes, the original language of astrology, and suggested techniques to develop "sight" by using symbols.

Lodged somewhere between an academic and a mystic, Sonrisa East is a rare new voice in the field of astrology and the gift of Sight.