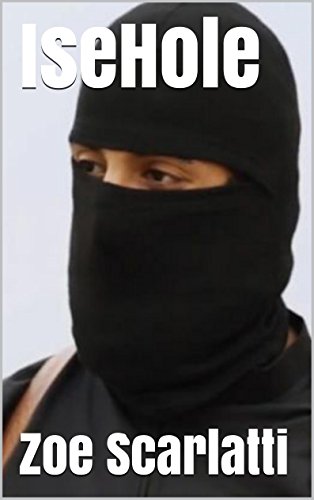 about this book: IseHole is Episode 6 of Zoe Scarlatti's groundbreaking Z-Spot Diaries. A new short premieres on (or before) the 1st and 15th day of each month. Also, new episodes are free on their premiere date.

Johnny is a strange bird. Even by the sociopathetically perverse standards of ISIS/ISOL he's alone on an Looney Douchebag Island.

John was thrust into the international spotlight on the strength of such hits as the James Foley execution, the murder of a Japanese journalist, and the playful open dialogue with President Obama.

But where's the residual value to these acts. A little buildup. A smattering of horror. But really. Stephen King was doing superior work in his attic as an adolescent.

How can ISIS parlay this fleeting fame into a more enduring gesture? Osama bin Laden's al Qaeda is still the gold standard. Two buildings. Three thousand bodies. And pissing on Donald Rumsfeld's shoes all in one morning?

If terrorism is truly an art form, al Baghdadi, and by extension our boy Johnny, are still jerking each other off with finger paints. Where is the resonance? The vision? The splendor?

The only way to escape bin Laden's shadow is to ensure a third act that truly brings the house down. And of course it has to be in Gotham. Where else in the world can you guarantee CNN Breaking News Status for the next decade? Only in Anderson Cooper's backyard.

Zoe Scarlatti in town ahead of a Monday meeting? Whoops!