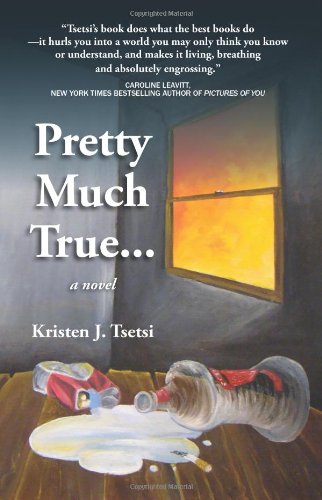 about this book: Kristen Tsetsi writes about home - not the homefront, but home, where those left behind by the warriors lead fractured lives filled with frustration and loneliness. With three primary characters--an uncertain girlfriend, a seasoned and secretive Army wife, and an unhinged veteran--and in a style reminiscent of Kurt Vonnegut's surreal narratives, Pretty Much True... is a story revelatory of a side of war that often is overlooked. The trauma of battle can be felt far, far from the battlefield. If the oft-repeated claim that soldiers never feel so alive as they do in battle is true, then Pretty Much True... shows that the ones they leave behind never feel so dead to the world as they do waiting for their loved ones.

Inspired by the author's very personal experience, this is the war story that's seldom told–the loss and love in every hour of deployment, and a painfully intimate portrait of lives spent waiting in the spaces between.

From the stink of a taxi-cab, to the incoherent babblings of a weathered Vietnam Vet, to a peace protest and a single velvety flower on a Civil War battlefield, Pretty Much True… reveals the monsters of a separation complicated by fear of death and explores the forces at work that bring people together or tear them apart, making you question everything you ever thought you knew about taking sides, or about right and wrong in love and war.

• "If novels were people, Pretty Much True… would be the love child of The Bell Jar and The Things They Carried." — UnfunnyMe's TMarie

What I didn't expect when I started reading this was that I'd be so riveted. I also didn't expect to find as much humor in it as I did - or as much truth, whether the scene involved an unwanted flirtation, a moment of watching the news, or what it's like to be involved in a conversation with a group of people - civilians who know nobody in the military - discussing the war. You see these emails go around all the time that have a list of things military spouses hate being told or asked ("Don't say, 'How do you do it? '") by civilians. I think civilians would have fewer questions about what it's like if they read "Pretty Much True...".