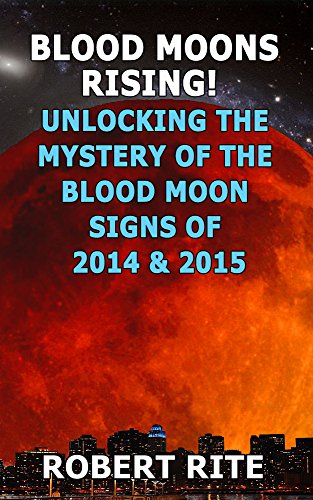 Book: Blood Moons Rising! Unlocking the Mystery of the Coming Blood Moons of 2014 & 2015 - A warning of something BIG about to happen? (Supernatural) by Robert Rite

about this book: Are the end of day prophecies already revealed in the heavens, and by the coming Blood Red Moons of 2014 and 2015? Do these signs have a divine significance?

Will the coming series of Lunar Eclipses (blood moons) signal the beginning of the Apocalypse?

NASA scientists have confirmed that in 2014 and 2015 there will be a series of blood moons (lunar eclipses) - four in all, and there will also be a solar eclipse in the middle of the blood moons. A total lunar eclipse is referred to as a blood moon because the event casts a red shadow on the moon.

When several (four) blood moons occur within a short period (a two year span) it is historically a sign of something BIG that is about to happen. This cosmic phenomenon has historically preceded a significant event that affects all mankind.

Learn what has happened the few other times that this cosmic event has occurred over the past 600 years - and what this upcoming series of blood moons may be warning us of.

You will also learn secret signs behind the some of the major star groups (constellations), Zodiac signs and other signs in the heavens.

Upon reading this book you will have a totally different perspective of the heavenly bodies, and their significance to mankind.

Other books by Robert Rite (more)