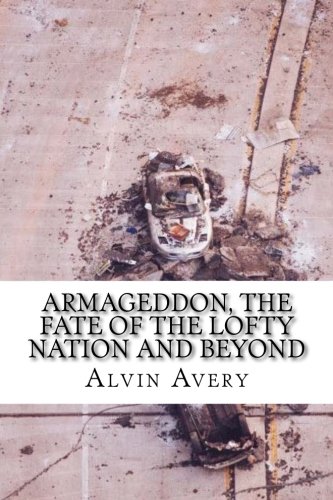 Book: Armageddon, The Fate of the Lofty Nation and Beyond by Alvin Avery

about this book: I wrote Armageddon—The Fate of the Lofty Nation and Beyond immediately after finishing its companion book, Zion, the Holy City of God.

I'd returned to my home in Bulgaria after a Greek holiday and remember sitting at my desk, looking out the window at the gnarled tree in the small, elevated, decorative area of my yard. The tree, regrettably, was later cut down because it began rotting from the inside. I remember typing frenetically on my computer's keyboard ignoring barking dogs, people, telephone calls, faxes and blaring TVs.

Armageddon was written in very much the same way as its twin book, Zion. The text and biblical references came to me almost as if it were automatic writing. Very little of the book, not to say nothing, came from me. It was entirely inspired, has 596 references, from the King James Version of the Bible and the Amplified Bible, and a glossary.

Armageddon, intrinsically tied to its companion, Zion, reveals what will happen at the end of time as well as describing the downfall of the lofty nation. Its claims, biblically supported from A to Z, speak of a future of terrible terror, war, cosmic signs, political upheaval, death, destruction and devastation.

Armageddon takes complicated biblical concepts and makes them easily understandable. The glossary further supports understanding by listing biblical terms that have more than one meaning.

If you answer yes to any of the following questions, then Armageddon—The Fate of the Lofty Nation and Beyond is a must read book.

Although the book refers to cataclysmic events, God, in his infinite mercy, wisdom and goodness is by no means divorced from this story. He is very much involved and wants people to know what's around the corner in order to be informed, prepared, and able to make the best choices regarding what lies ahead.