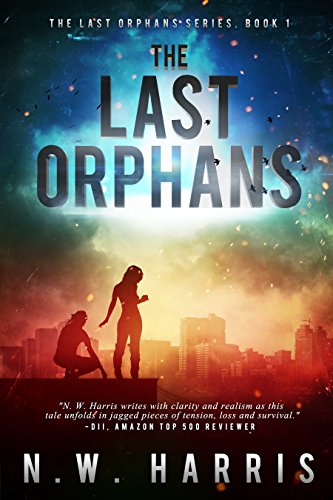 about this book: In a span of mere hours, an alien weapon causes animals to attack and kill the entire adult population. Sixteen-year-old Shane Tucker and every other kid in the world are left to fend for themselves. As one of the newly made elders in his small town, Shane finds himself taking on the role of caretaker for a large group of juvenile survivors. One who just happens to be Kelly Douglas—an out-of-his-league classmate—who, on any other day, would have never given Shane a second glance.

They fight off the worst of the escaped juvenile delinquents from a local prison, survive a super tornado that’s a side effect of the weapon, and fight their way through armed gang members bent on keeping things the way they are. On a quest for answers, they discover the annihilation of the adults was only the beginning. Shane and his friends are not the unlucky survivors left to inherit this new, messed-up planet. No—they are its next victims.

The Last Orphans shows the darkest sides of humanity, but at the same time demonstrates that ordinary people will rise up and fight for what is right and will sacrifice everything to set the world straight. In the end, the alien weapon causes the kids to turn on each other. When they manage to deactivate it, they think they are alone in a world with no adults. Then a woman in a black suit shows up, a twist that sets the stage for book two of this spine-tingling adventure that will have you gasping for breath all the way until the last page. The Last Orphans is the first book in an all-new apocalyptic series.