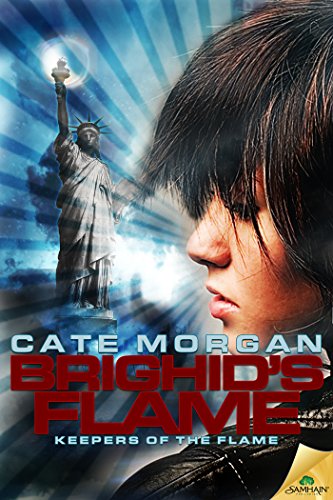 Book: Brighid's Flame (Keepers of the Flame #3) by Cate Morgan

about this book: I liken the "Keepers of the Flame" series to "Highlander" in an apocalyptic setting, starring female action heros.

The third installment, BRIGHID'S FLAME, follows unknowing Keeper of the Flame Tara McKenzie and best friend Stephen Saint John have come a long way from the Central Park shanties of their childhood. Now they're working closely with entrepeneur Vincent Dante, head of the Dante Foundation determined to rebuild New York after the destruction of the Seven-Year War. Now they must return to their roots, in which a rabbit hole of betrayal and destiny's call awaits, in order to save the city they love.

Did you know New York City is chocka-block full of apocalyptic symbology? Imagine my surprise when, in the course of my research, I learned that Saint John's Cathedral--featured in BRIGHID'S FLAME--is simply covered in it! And no wonder--the cathedral is named for Saint John the Divine, who wrote the Book of Revelations.

Most prominent are the Prophetic Pillars. The are several pillars depicting scenes from Revelations and the Apocrypha, but the two pillars I ended up using in Keepers #3 are not a little chilling. Conceived in 1997, The first pillar depicts the New York skyline at the time, whole and well. The second, however displays the city's destruction and ultimate falling into sea.

It just goes to show: sometimes, you just can't make this stuff up.