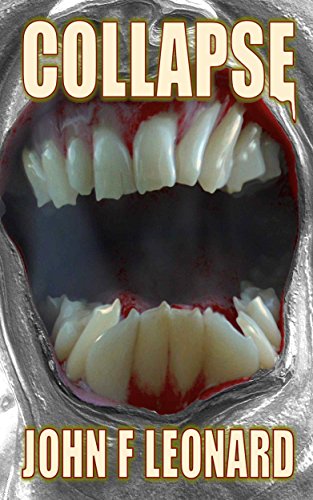 about this book: Collapse is an apocalyptic horror novel. It involves multiple story lines that converge as the characters attempt to survive a radically changed world.

A mystery illness sweeps the globe. Humanity stands on the brink of collapse - hence the title. Those affected fall into a coma-like state where they undergo radical physical changes. They awake transformed and ferocious.

Collapse will, I hope, appeal to readers who enjoy post-apocalyptic literature. Feedback and reviews have been positive. It's my first book and I wrote it for a very simple reason - I love reading dystopian, end of the world stories!

The characters are normal, real people. Well-drawn, with some depth, so the reader can relate to them and identify with the dilemmas they face. The landscape in which they appear is far from ordinary - it's horrifying. A world where the things we take for granted are disappearing or already gone, replaced by unimaginable threat.

Strictly speaking, it's not a zombie novel, but it does share a lot of those qualities. The main difference is that the creatures in Collapse are alive but mutated ...savagely hungry and terrifyingly fast.

Apocalyptic tales have always intrigued me, especially those that involve monsters. Developing the concept of the creatures and storylines in Collapse took a fair while but was an absolute joy.

The cover image started out as a photo of someone near and dear to me. Needless to say, it's been transformed into something far more disturbing than the original.