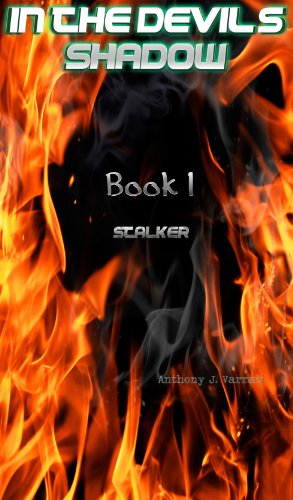 Book: Stalker (In The Devil's Shadow) by Anthony Varrati

about this book: This book is about a man named Christian that has a very hard life. He cant live a normal life because he's got problems; problems sleeping, problems making friends, problems controlling himself. He sometimes goes into fits of rage for no reason at all.

One day everything gets worse. Christian has a nightmare that is so so real that it seems to crawl into reality. When he awakes, he finds a man in his living room, clothed in shadows, whispering to him. He's calling for Christian to join and says that he will become something powerful soon. Christian has met the first of many new creatures in the Devil's Shadow.

My own nightmares inspired me to write this book in some ways. My mind is always working overtime and I see inspiration in everything. I would look outside and see an ominous shadow and wonder what it would be like to give that shadow life. I've always been big on writing and I have trouble sleeping at night sometimes with so many ideas floating around in my head.

This book has a potential to generate interest in all readers. There is a fantasy aspect, as the book involves things such as demons, but has a thriller and adventure aspect to it as well. There is romance and challenge in the story as well.

It took me the larger part of a year to write this story, but I wrote it part time. I am currently working on the next book in this series and I've made much headway.

The hardest part of writing the book was coming to the realization that I had to stop eventually. I couldn't write forever and when I wrote from night to day, I knew that if I didn't sleep soon I would go crazy.

I chose this cover because the fire was a perfect representation of my views of hell. The story is largely based on a physical fight of hell and Earth.

I researched certain aspects of things to write this book such as weapons and castle-building. It involved a lot of internet browsing and referencing but it wasn't so bad.

I learned about myself writing this book. I learned that anything can be done and that I needed a way to vent my imagination.

I want my readers to give me a chance to surprise them. I feel like the story is solid and I have something that people want to hear. I appreciate every and any reader that takes time from their day (or night) to read my book.