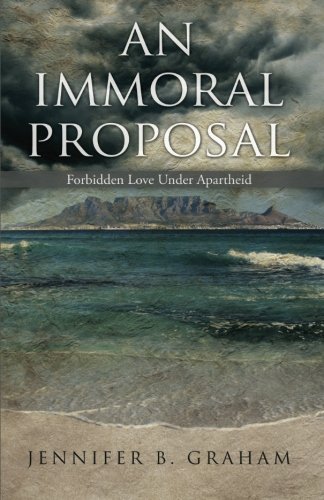 Book: An Immoral Proposal - Forbidden Love Under Apartheid by Jennifer B. Graham

about this book: The year was 1974. I worked as an office clerk at a linen manufacturer. He was the boss' son. As unlikely as it may seem, a chemistry sparked off between us and we fell in love. The problem was that our relationship was against the law. This was South Africa during apartheid forbidding romantic and sexual relations between white and non-white people. He is white and I'm brown (or Coloured - as I was classified under the Race Classifications Act.)

Our relationship was a contravention of the country's Immorality Act law on which the book title is based. Our deep love and belief in each other demolished the rules of race, class and societal taboos, bringing my sweetheart to make that "Immoral Proposal." Whether for us love was blind at the time or we were simply two foolish young people, we were playing a dangerous game which meant imprisonment if we were caught together.

An Immoral Proposal begins with the enormous conflict of my boyfriend and my predicament. In the next chapter I take the reader back in time to my family history and what it was like as a person of colour to live under apartheid.

South Africa's draconian racial laws caused untold hardship for all people of colour denying us the most basic human rights and freedoms. The "Coloured" people (being both non-white and non-black) had always been politically marginalized, sandwiched between the two races. We were a people stripped of dignity, with no definitive identity.

The hardest part of the book was recalling and reliving the psychological and physical abuse I suffered from a macro (national) aspect as well as the micro aspect in terms of family dysfunction. At the book's inception I began writing it as a novel, so that I could hide behind it, but my publisher friend suggested that it be written as a memoir. An Immoral Proposal took over twenty five years to write because it required me, as a memoirist, to become transparent, bearing my heart and soul to my readers.

It took that long also as I grappled with the issue of racial identity as well as a gamut of other factors that shaped me as a woman. The second half of the book recounts my falling in love with Michael Graham and the difficulties and danger that befell us.

An Immoral Proposal gives readers who may have a vague idea of apartheid through what they've seen or read in the media, first-hand insight about the psychological and physical impact that horrible regime unleashed on its people. To soften the horror of growing up under such circumstances, I intersperse humorous observations throughout the book. My story ends on a high with an intriguing love story; and who doesn't love a good love story?

Video 1: An Immoral Proposal by Jennifer B Graham
Video 2: The author and her husband interviewed