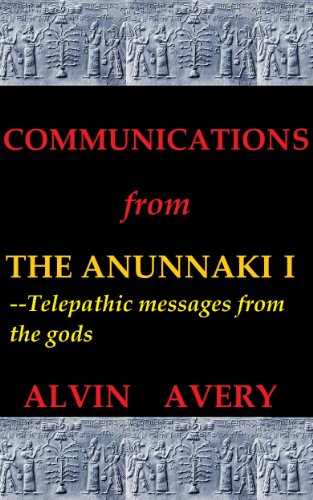 Book: Communications from the Anunnaki I--Telepathic messages from the gods by Alvin Avery

about this book: I started channeling the Anunnaki, the gods of ancient Sumer, in 2011.

Since that time, I've received countless telepathic messages from them.

Although the messages may appear repetitive, upon closer reading they are not. Each message is unique, delivered by a different member of their race. I perceived this to be the case as I communed with them on an almost daily basis.

Fireside chats with the Anunnaki

Winged gods who inhabit the fourth dimension, the Anunnaki are clearly able to control the elements. I have, for example, while seated by my wood-burning stove, seen them "come alive" in the fire. The fire I saw was no longer a typical fire, but suddenly became "in-spirited" by the Anuannki as they conversed with me telepathically. When our conversations would end, the fire returned to its normal state.

The Anunnaki, the Mighty Ones of God, have returned to save humanity from "destruction, devastation, domination and death." They have come to "deliver us from the 'wicked,' Reptilian branch that 'violates all of the canons of our race.'"

The Anunnaki, present-day rulers of Planet Nibiru, have come in their ships of light from the far reaches of the universe to save people from Reptilian domination. They have come to heal wounds perpetrated by the wicked Reptilians.

The Anunnaki, who have come to restore our dignity and return to us what was taken away, are here to stay. They are heralds of a new, higher-dimensional, higher vibrational earth where the grave injustices of the past will be no more.

Communications from the Anunnaki I—Telepathic messages from the gods is a must read for anyone who wants to learn the fate of those who wish to strip us of our God-given right to enjoy the resources our beautiful Planet Earth has to offer.