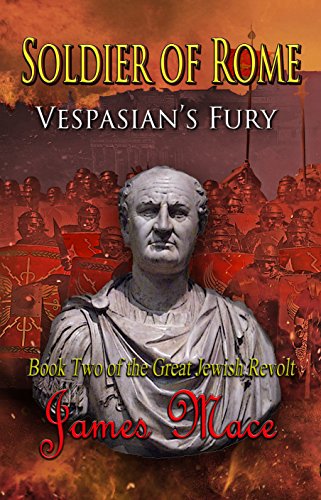 about this book: 'Soldier of Rome: Vespasian's Fury' is the second in my trilogy about the Great Jewish Revolt from 66 to 70 A.D. It begins immediately where the first book, 'Soldier of Rome: Rebellion in Judea', ends. The forty-seven day siege of Jotapata, in Galilee, has come to an end. The rebel general, Josephus, has been captured and brought before the Roman commander-in-chief, Flavius Vespasian. In what some argue was a desperate ploy to save his own life, Josephus makes a bold prophecy, that God has decreed Vespasian will in time become Emperor of Rome.

The story then follows the next two years, as Vespasian unleashes his full fury upon all of Galilee, and then down into Judea itself, burning every town and village that tries to resist. Tens-of-thousands are killed, with thousands more, mostly women and children, are sold into slavery. Despite this relentless onslaught upon the Jewish holy land, the various factions of zealots still refuse to stand together against the common enemy. Instead, the sects lead by John of Giscala and Simon bar Giora plot to overthrow the more moderate government in Jerusalem, while also fighting a series of civil wars against each other. Josephus, while mourning the loss of his friends who died at Jotapata and fearing for his family in Jerusalem, realizes that the only way to help end the slaughter involves collaborating with his imperial captors. The stories of individual Roman legionaries and Jewish rebels continue, as each deals with their own hardships and tragedies. The book concludes in 68 A.D., when events in Rome will change the fortunes of all.

Like the previous volume, this one relies heavily upon the works of Josephus. I took into account the numerous accusations by some historians regarding his personal bias; i.e. when describing known rivals, such as John of Giscala, who had tried to murder Josephus when he was still Governor-General of Galilee. That being said, his works are the only ones that survive to this day, which were penned by someone who was actually there. His attention to detail is far greater than the Roman historians Tacitus and Cassius Dio, who seem to gloss over everything except the major battles. Granted, this could be due to Josephus' works being commissioned by the Roman government after the war, and so scholars such as Tacitus elected not to restate what they reckoned their readers already knew.