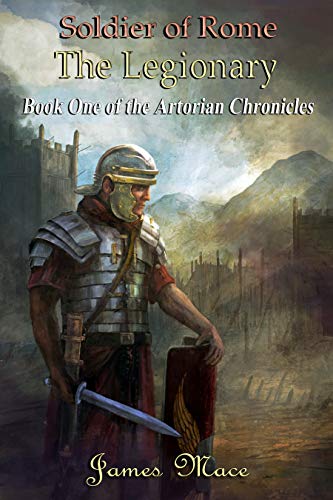 Book: Soldier of Rome - The Legionary (The Artorian Chronicles Book 1) by James Mace

about this book: Soldier of Rome: The Legionary is the first volume in the series, "The Artorian Chronicles". Written while I was serving in Iraq (2004-2005) as a cathartic means of escapism, it gives a 'grunt's eye view' of what ancient warfare must have been like. Before this book came out, most novels about Ancient Rome dealt with the emperors and generals, with the soldiers in the ranks used as little more than window dressing. In "The Artorian Chronicles", we see the world through the eyes of a legionary, beginning when he first joins the legions at seventeen.

This first book begins with the disastrous ambush, which saw the destruction of three Roman legions, in the Germanic forest of Teutoburger Wald in the year 9 A.D. Among those killed is a young legionary named Metellus. Six years later, his younger brother, Artorius, enlists in the legions, intent on avenging his brother's slaying.

Artorius goes through the brutal crucible of recruit training, soon after he enlists in the Twentieth Legion, on the Rhine frontier. Soon after, the entire army, under the command of the venerable Roman general, Germanicus Caesar, unleashes its campaign of vengeance. The Romans are utterly relentless, though their barbarian adversaries battle them with plenty of cunning, as well as brute force. Over the next two years, the Germanic alliance and the Roman legions will engage in one of the most savage campaigns of the ancient world. For Artorius and his fellow legionaries, they will find themselves enveloped in a holocaust of fire and blood.