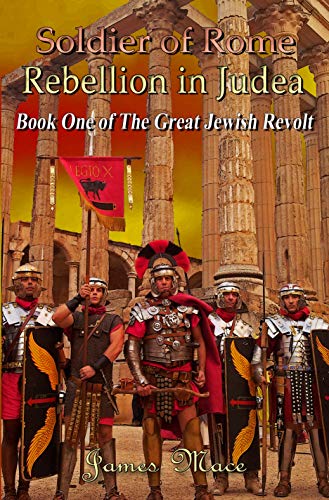 about this book: Kingdom of the Damned is a trilogy that tells the story of the Great Jewish Revolt of 66 to 70 A.D., which culminated with the destruction of the Second Temple. As these are novels, rather than dry history books, the reader is truly taken back to another time and place, living the events through the eyes of those who were there.

This first volume, 'Rebellion in Judea', tells of the origins of the uprising from both Jewish and Roman perspectives, and through the points of view of historical persons such as Vespasian and Josephus, down to the Judean warriors and Roman legionaries. We see a number of well known events, such as the Roman disaster at Beth Horon, to the Siege of Jotapata in Galilee, where Josephus made his final stand against the armies of the Roman war master, Vespasian. There is also a lot of new ground covered, even for those familiar with the Judean rebellion. An example of this is the Battle of Ascalon, near what is now Ashkelon, Israel. It was one of the turning points of the early war, yet is rarely mentioned, let alone described in any detail from the perspective of those who fought there.

I chose the name 'Kingdom of the Damned' as a type of play-on-words with the old Kingdoms of Judah and Israel. During my research, I read countless descriptions of the extreme violence and utter devastation the people were subjected to, often by each other! This is a very complex story, for the Jews were not a unified people, fighting against Rome. Instead, there were numerous factions battling an extremely bitter civil war amongst each other, instead of unifying against the imperial army. Many of the extremists viewed death as preferable to standing together, and they would kill any who did not hold their radical beliefs as 'traitors', to include women and children. The entire ordeal was a tragedy of such magnitude, that 'Kingdom of the Damned' seemed a fitting title.