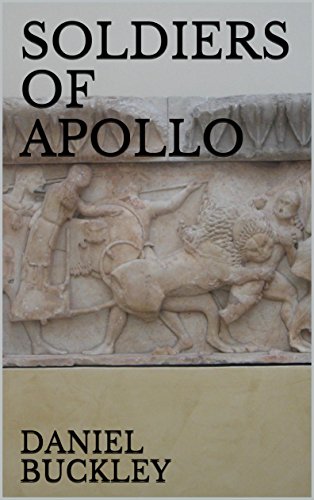 about this book: Soldiers Of Apollo explores the origins of the sun and archer god Apollo in the ancient world.

Homer mentions the archer deity Apollo in the Iliad he appears as the deity of the Trojans and the city of Troy.

Known by differing names in the ancient world in Hurrian Aplu in Anatolian lands Apaliunas.

Through his oracle sites the Sun god connected with his followers directly in the form of sacred oracles via his conduit the Pythia at Delphi.

His followers would travel from all corners of the ancient world to the oracle sites of Delphi, Claros and Didyma.

Citizens, Statesman, Poets, Philosophers, Kings, Princes, Generals and emperors consulted the Delphic oracle for guidance all are covered in the book.

All Soldiers Of Apollo wielding pen or sword they were empowered by the deity of truth light and philosophy they changed history and promoted Greek culture around the ancient world during their lifetimes work.

Research and writing the book covered circa two years due to the diverse figures and the events the book covers it represents my most difficult yet rewarding book to date.

Researching and discovering the connections between the figures in the book highlights the impact and influence the Greeks had on world culture and history.

Socrates, Plato , Aristotle , Philip of Macedon and Alexander the Great all lived in this vibrant time period in the Greek world.

Figures such as Timoleon and his fellow Corinthian Demaratus who campaigned with their warriors displayed bravely against all the odds to free the island of Sicily from the Tyrants and the power unleashed on them by the invading Carthaginian armies.

All had been influenced by their beliefs in Apollo acting on the sacred oracles issued by the Pythia from the spiritual centre of the ancient Greek world in Delphi.