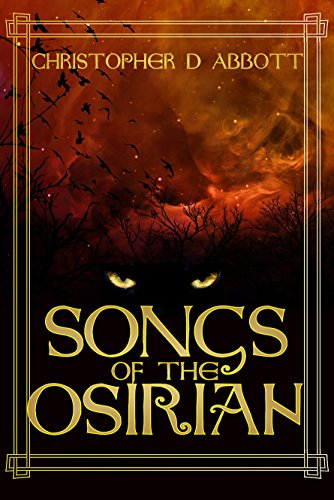 Book: Songs of the Osirian by Christopher D. Abbott

about this book: Excerpt from the Songs of the Osirian:
Inside his mind he heard Akhet's voice. 'As a sun ripens fruits and gives its life and warmth to all living things, so shines the Songs of Light on all– black of heart or otherwise–filling them with the fire of love and great understanding.'

The story of the Osirian return to Earth

Songs of the Osirian started life as a short story entitled Songs of Beast. It was published by Media Bitch Literary Agency and Productions in April 2016. When I first started writing for this allegorical world, I had no idea that it would end up becoming the monster it did.

Essentially, the story depicts a catastrophic event that wipes out most of mankind. But this event has a science-fiction twist. I envisioned beings from another universe that were so far evolved they were godlike in powers. Over millennia these beings (known as the Ardunadine) developed a transcendent idiolect of symphonic communication – referred to as the Power of Song. This phonological power allowed them to create and weave patterns in the universe, brought to vision by Arrandori–for want of a better reference the Father of All–and thus created the universe we live in. The character of Beast is a fallen Ardunadine banished to Earth for unspeakable crimes. As the story unfolds, we discover that Beast wove an escape plan into his banishment and although he is cut off from the Celestial Temple of Song, his darkness tainted the world so that what we now understand as evil, seeps into its fabric and slowly manifests in all life during the planet's evolution.

Jump forward millions of years and Beast has an army of dark creatures born of his own dreadful being. Terrible behemoths known as Faulgoth rampage and lay waste to our world with neither compassion nor remorse.

That's when the Ardunadine, who are forbidden to directly interfere, send the people of Earth teachers known as the Osirian. These beings are equally godlike to man, but lessor in power than their Ardunadine masters, who the Osirian themselves consider divine. The Osirian, having no direct contact with Man's enemy, imbue Kings and Queens of the world with the Power of Song, thus enabling them to fight on equal terms.

When I developed the Osirian Pantheon, I was mindful to keep some of the original concepts from Ancient Egyptian mythological history. These ethereal beings use songs and crystals as their means of power. They manifest in human and hybrid-animal form. There are familiar characters such as Osiris, Sobek, Isis, Neith, Set, and Horus. But the story is about the struggle to build – or - rebuild their world. From the perspective of characters who knew the world prior to its destruction; and from those who were born after, each side considering an alternative course of action. The conflict becomes a simple one: set the world as it was before with all its unfairness, or, build this world, where poverty is gone, where disease is no longer an issue, and where men and woman of all races, cultures and creeds, seek cooperation through adversity, rather than conflict ...

... and in the background, Beast and his tainted men and foul creatures seek to plunge the world into darkness, with only the Osirian light preventing them.
This is my first outing into the fantasy genre (I am a mystery writer) and I have to say that I enjoyed the process immensely. The Songs of the Osirian will be the first of many books in this series and with each one, man's enlightenment or demise will fall steadily into their own hands, and not those of the Osirian.

If you're looking for a fast paced thoughtful story with monsters, Egyptian gods, and furious battles, then I believe you will enjoy this story.

I was very fortunate and humbled to have a delightful foreword written by Chase Masterson, who has most recently been seen guest starring on CW's The Flash, which won the People's Choice Award for "Favorite New Drama." Best known for her break-out role on Star Trek: Deep Space Nine, one of the highest-rated syndicated shows of all time, Chase is loved by millions of fans worldwide.