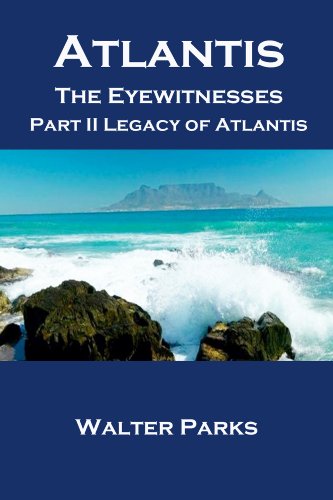 Book: Atlantis The Eyewitnesses Part II - The Legacy of Atlantis by Walter Parks

about this book: Atlantis was not a fiction created by Plato nor was Plato the first to write about Atlantis. We have found a much earlier document written about 9,250 years before Plato's writing.

Almost all of the ancient societies of the time also described Atlantis.

We have also found archeological and scientific evidence that provide convincing proof that Atlantis really did exist.

This book is one of 3 parts that describe our evidence:

Part I Creation of Atlantis

Part II Atlantians and Their Legacy

Very accurate satellite based cameras now provide pictures of the sunken continent of Atlantis. It is at the bottom of the Mid-Atlantic Ocean, just as the ancient writings of Plato told us. Hundreds of ancient documents can now be taken more seriously so that we can see that Atlantis really did exist; and we can truly understand the great legacy of Atlantis.

The super destructive eruption of Mt. Toba in Sumatra about 74,000 years ago killed (most likely) most humans and caused a "nuclear winter" for 6 years that halted and slowed down most migration of this group migrating out of Africa. Their surviving progeny did not turn west and reach the Mediterranean until about 52,000 years ago.

DNA studies have been used to trace ancient human migration routes and to obtain general dates for genetic prehistory. Such dates can be combined with archaeological and climatological data to obtain a reasonably accurate understanding of early human migrations.

The groups that initially migrated out of Africa came in contact with earlier archaic humans including the Neanderthals. During the generations of the group that finally reached Atlantis, they came into so many encounters that by the time they reached Atlantis it is believed that 80% of their nuclear loci in their DNA includes genetic material from non-African archaic humans.

The climate greatly influenced their genetic changes and their migrations. The weather was suitable for migrations when they left Africa 90,000 years ago, but the Earth experienced the greatest glacier coverage from 75,000 to 60,000 years ago. This is the main reason that they did not turn west towards the Mediterranean Sea until about 52,000 years ago.

They could not go north because of the glaciers that covered Europe at the time, nor south because of the Mediterranean Sea, so they continued westward. They reached the Atlantic Ocean about 45,000 years ago.

The offspring of any such breeding may have been infertile in a manner similar to the infertility of a mule which results from the interbreeding of a horse and a donkey.

We do know that the pre-Atlantians were an experienced and successful people. Their survival through the ages of the long migration from Africa and encounters with severe volcanic and weather events developed in them a high level of intelligence.

Their wall paintings and illustrations in caves date back more than 30,000 years.

The paintings and illustrations preserved in caves in modern day France become very sophisticated by about 17,000 years ago. The Lascaux caves, with their spectacular drawings of bulls, horses and antelope, were then painted 16,500 years ago.

At the time of their arrival Atlantis was the largest land mass on the Mid-Atlantic Ridge. Plato said that it was:

"….an island situated in front of the straits [Gibraltar] which are by you called the Pillars of Heracles; the island was larger than Libya and Asia put together, and was the way to other islands, and from these you might pass to the whole of the opposite continent which surrounded the true ocean; for this sea [Mediterranean] which is within the Straits of Heracles is only a harbor, having a narrow entrance, but that other [Atlantis] is a real sea, and the surrounding land [North and South America] may be most truly called a boundless continent."

Read and you will become convinced that Atlantis was real.

The civilization of Atlantis was the basic foundation of the great Sumerian, Egyptian, Creek, and Roman civilizations that followed.

Atlantis was the foundation of all we are and all we know.