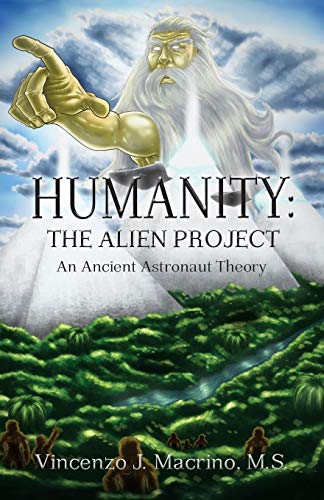 about this book: Based on the author's 30 years of examining ancient literature, texts, codices, scrolls, and hieroglyphs, author Vincenzo J Macrino examines Ancient Astronaut Theory in a unique and informative way. His work discusses the familiar theories of Zecharia Sitchin, but goes even further to investigate the beliefs and knowledge of ancient cultures seldom covered and does so in the words of the ancients themselves followed up by his own insights and commentary. Humanity: The Alien Project is definitely a must read for anyone interested in ancient astronaut theory and the mysteries of mankind's origins

Raised a Roman Catholic, Macrino received a formal education in bible studies, and at a very young age, he noticed inconsistencies and unexplained events in biblical texts. He was particularly fascinated by descriptions of flying craft, giants, and strange, glowing beings – some of whom procreated with women! A lack of answers from the Church drove him to begin his own investigations. At age 15, his discovery of the works of Ancient Astronaut theorist Zecharia Sitchin launched his lifelong hobby of research.

Macrino has travelled across North America, particularly Mesoamerica and the Yucatan, as well Central America, the Caribbean, the Hawaiian islands, and Europe in search of answers. He has spoken with tribal elders, art historians, researchers, and religious scholars on the topic of alien encounters throughout the ages. His lifelong study of mythology, legend, folklore, and history coupled with an education and professional experience in investigative research arms Macrino with the necessary tools to analyze Ancient Astronaut Theory in an informative, understandable, and enthralling way.

Whether you are already a believer in ancient astronaut theory or simply want to learn more about it, this book is for you.