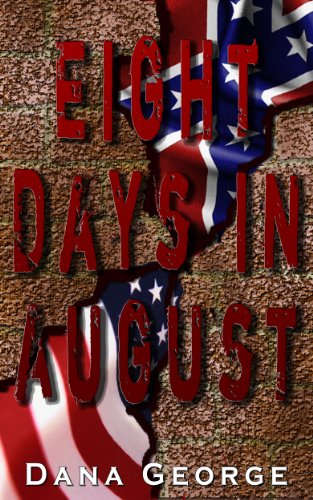 about this book: This is the third historical novel I've written. What drew me to the idea of writing about the Missouri/Kansas border in 1863 was how little I knew about that region of the country. That's a crying shame, considering I grew up on the border.

At first, it felt a little like a lark -- learning more about the very places I visited as a child. Frankly, as a kid I was more impressed by exciting day trips to places like Old Abilene Town, Jesse James' childhood home, and Fort Osage. Lawrence, Kansas looked like a regular town by the time I visited and didn't do much to spark my interest.

That's a shame, because if I'd bothered to take a closer look I would have been fascinated by the events of 1863 and by the amazing people who lived through them. It took sturdy men and women to hold their own during that time and their stories have clung to me.

I researched this book for over a year, learning about the collapse of the women's jail in downtown Kansas City (on a lot I'd driven by 100 times). I found out enough about the despot William Quantrill to wonder why anyone would follow his lead. I learned that both the North and the South committed atrocities that would haunt them. I found out how ordinary people managed to survive as the Kansas plains exploded. Most of all, I realized that in terms of the world turning upside down, eight days can be an eternity.

Although this is a novel, complete with characters I grew to care about deeply, it is steeped in the history that almost seems too fantastic to be true.

Being a history buff myself, Eight Days in August was a great read for me. After I got started I could't put it down, I read it in one sitting, as I did all your books. Having grown up in south Kansas City I was very much enjoyed Escape from Ruskin Heights. All the places you described there I have been. My wife graduated from Ruskin High School, I met her at Paul's Pizza on Blue Ridge some 46 plus years ago. Your books are great but like alot of people I'm sure, want more. Eight Days in August was my favorite,anything with history catches my attention.I was unaware of a women's jail in KC back then. Quantrell I have read about in many books. Keep them coming Dana, I'm having a blast reading them. [by Sonny Lawson]