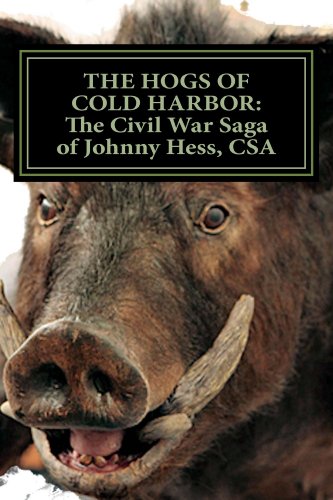 about this book: An idea came to me suddenly one night after years of marinating in the bitter spirits of my unconscious mind. I began to wonder just how horrifying and surreal it was to be a soldier in the Confederate army during the War of Northern Aggression.

From experience I knew too well how unbalanced you could become in the military if you are introverted, sensitive and prone to thinking for yourself. Strange ideas come to you and ferment because you can't get rid of them. Your bizarre thinking separates you from the others. Odd phobias take root in your mind and produce a never ending terror in your heart.

As I was mulling this odd, either by accident or fate a diary came into my possession written by a young Confederate soldier who had marched over three thousand miles in three years; fought in thirteen serious battles in four major campaigns. He had fought with the 29th Virginia Infantry, Corse's Brigade, Pickett's Division, Longstreet's Corps.

Strangely, however, his diary spoke of a "third enemy" which he feared worse than the Northern troopers or the zeal of his own officers. Stalking both armies, living in the forest, were hordes of super intelligent, wild hogs waiting for battles so they could invade the battlefields at night and eat the dead and wounded -- always face first so no screams could be heard.

Instead of just a timeline diary, I had the journal of an existential horror show as one man saw the war with a madman's eye. I also knew I had my greatest novel in hand. It took me two years to research the path of war described in the diary, plus the incredible cast of characters. Then I wrote "The Hogs of Cold Harbor" in fifteen months.

It didn't take off when published by "Whitmore" the next year. Though endorsed by no less than the late Norman Mailer, the book hardly moved. I presented speeches about it, wearing my Confederate uniform, to every Sons of Confederate Veterans chapter in Maryland and most of Virginia. Gradually - like clotted black blood in some literary vein -- the book began to move.

Today it can be described as a "cult" book, as it is read mostly by my Southern brethren -- though a few Yanks have discovered it. I have some emails over a thousand words long about it -- mail which I treasure. The book is historically accurated and impeccably researched: some readers appreciate it mainly as a history of the 29th Virginia Infantry Regiment. But most are shocked by the surreal, almost mad images of war experienced by my existential soldier. Not only brutal soldiers inflicting death but brutal hogs eating the wounded scar my man forever. And -- I hope -- scar my readers forever.