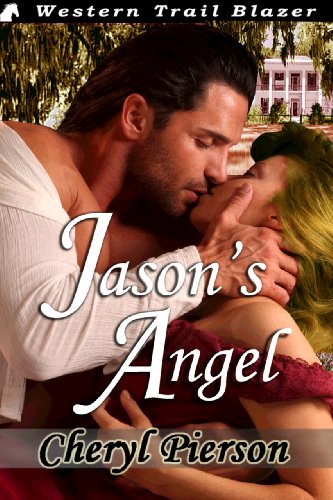 about this book: JASON'S ANGEL is the story of a young woman, Sabrina Patrick, who rescues two wounded Union soldiers from a nearby Confederate hospital where she volunteers. She has them brought to her home where she lives with her aunt and her younger sister. Her aunt is not pleased, but what choice did she have? If she'd left them at the hospital they would surely have died from lack of care.

Jason McCain is southern born and bred, being raised not far from Sabrina's home. But his mother was Cherokee, and he harbors deep seated resentment against the "neighbors" who killed ruined his family, leaving him and his younger brother orphans. When the War came, he readily joined the Union to fight against the South because of his anger.

But Sabrina could change all that and bring peace to his heart. She's risked everything to bring Jason and his brother into her home and care for them. Will he be able to let go of the bitterness and start a new chapter in his life? With the end of the War nearing, he's got some choices to make.

JASON'S ANGEL was first released in the Victory Tales Press anthology A HISTORICAL COLLECTION. It's now also available as a single-sell short story for only .99!