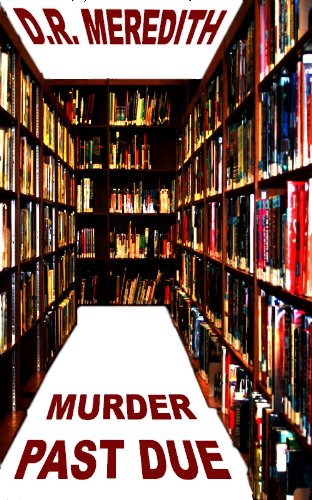 Book: Murder Past Due (The Megan Clark Mysteries) by D.R. Meredith

about this book: To celebrate the six month anniversary of the Murder by the Yard Reading Circle, Megan convinces Agnes Caldwell, owner of Time and Again Bookstore, to sponsor a tour of sites of Amarillo's most notorious murders. The members of the discussion group will dress in appropriate costume and re-enact each famous murder at its actual site. They will sell tickets to the general public in order to publicize both the discussion group and the bookstore. As Megan's best friend and sidekick, Ryan Stevens is appointed moderator of the tour. Ryan is not enthusiastic. A murder tour and Megan Clark is tempting fate. He feels a Predicament approaching. Predicaments and Megan Clark often prove a deadly combination.

The Predicament arrives in the person of Bruce Gorman, an elderly Amarillo, Texas, millionaire whose granddaughter-in-law was murdered shortly after marriage to his grandson. Subsequently, the grandson committed suicide out of guilt, or so everyone assumed. Bruce Gorman does not believe his grandson murdered his bride, nor does he believe he committed suicide because of a guilty conscience. Gorman wants to hire Megan and the other members of the reading group to investigate the twenty-year-old case and clear his grandson's name because "I've been reading the papers, Megan. You and this reading circle of yours are responsible for solving four murders in four months. Not only is that a one hundred percent success rate, but do it at a damn sight faster pace than the police."

Megan and the reading circle accept the challenge while Ryan vehemently objects. "I suppose it won't do any good to remind you again of sleeping dogs and the waking thereof," he asks Megan. "Not a bit," she replies as she jumps headfirst into the Predicament that so worries Ryan. Anyone who has successfully escaped being uncovered as a murderer for twenty years will not allow a short, redheaded amateur sleuth to unmask him. He will murder her first.

This tale of poisonous family dynamics, greed, a grieving grandfather, and a twenty-year-old cold case is humorous, but underlying the humor is a very real commentary on the human condition. I'm still not sure those in search of gritty realism in their mysteries should download it. If they do so, it is at their own peril.

• "How ideal to play sleuth in the company of two such appealing and intriguing characters as Megan Clark and Ryan Stevens." — Joan Lowry Nixon