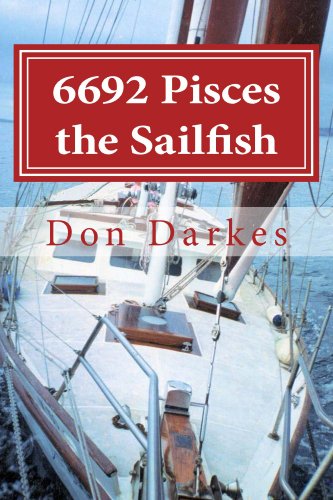 about this book: This is the True story of my Family Adventure and Disaster that was the best thing that ever happened to me! The number, 6692 is the date, June 6th '92, when the curse placed upon the vessel finally destroyed her. Although the ship was originally cursed when she was built and originally named Pisces, (the Star-sign). some believe she incurred additional "bad luck"? because I effectively renamed her by painting a Sailfish outline around her name, Pisces, turning her into a the fish instead of a star sign. I also left port on a Friday. Renaming a boat and leaving port on a Friday is considered bad luck by sailors.

My memoir follows my young family's adventures after we abandoned our secure, comfortable and meaningless existence in suburbia to follow our dream. This often humorous account, relates how we unwittingly bought a jinxed yacht, watched it smash itself to pieces and with no prior experience, skills or training rebuilt it, sailed away, rediscovered paradise, punished betrayal, found ancient treasure and survived sharks, crazed lemurs, gossiping walruses, a lynch mob, a curse, explosive gas, flaming epoxy and oozing quicksand. It also relates how, in answer to my prayer, we lost everything we owned and experienced heart-breaking generosity that altered our lives and welded our family even closer together. The book explains why we celebrate June 6th every year as Pisces Day with a family meal of Prawns and Rice. It also reveals why and how I tried to commit murder.

Why? A note from the author

Why do I believe that this Adventure and its Disaster was the best thing that ever happened to me? That is what this book is about.

Why 6692? You may well ask this after reading the title of this book. It is a date. June sixth, nineteen-ninety two. That was the day I lost every material thing that I owned and also the day I discovered that the only possession of real value is Love and Family. Somehow, every June sixth since then, I have experienced something that has given me pause for reflection and reminded me again how easily I could have lost my Family due to my own selfishness and misguided belief that money and prestige were more important than their love and respect.

Why Pisces the Sailfish? Because of the alleged curse that was placed upon the vessel which finally destroyed her. Purportedly she was originally cursed when she was built and originally named, like thirteen of her doomed sister ships, after Horoscope or star signs. I effectively renamed her by painting a Sailfish outline over her name, symbolically transforming her from a Star Sign into a Fish and effectively renaming the boat. This is an act which is considered bad luck by sailors. Although I claim not to be superstitious, I cannot ignore the uncanny coincidences that some would regard as a curse or a jinx. I choose to see them as the unpredictable results of my prayers that are being answered in Profound and Mysterious ways.

Why Curse, Coincidence or Creator? Please read our true story and then decide for yourself.

Why did I wait for twenty years to write this book? Despite encouragement from family, friends and from complete strangers to write this book, I refused to do so for almost twenty years whilst I waited for someone that I hated; someone that tried to murder; -to die. During all that time our poisonous secret remained trapped inside me like the key log that holds its fellows prisoner inside a logjam.

Ten years previous to the writing of this book, after a short story based on one of the opening chapters reached the finals in a daily newspaper's annual True Short Story competition I was inundated by requests from its readers for the rest of the tale. I refused to write it, despite the fact that an informal survey of their motivations revealed that many feel trapped in lives that they hate and that many fantasise about sailing away from it all and that some dream of travelling or experiencing adventure, but lack the courage to act. I believed them when they told me that they would enjoy my book and perhaps draw caution or inspiration from it. They wanted to know what happened. Nevertheless I could not bring myself to write anything beyond chapter 28.

During 2012, twenty years later to the day, I read a long awaited obituary and the dam inside me was breached, releasing this story and other pent-up books from the overflowing well within my soul.

My incredible wife believes that women will relate to our tale simply because it is a true family story. If she is correct I hope they also identify with its multifaceted heroine, a strong woman who is simultaneously a partner, a best friend, a mother, a lover and family anchor.

Although this memoir will perhaps resonate more with those who experienced the final years of Apartheid in South Africa, it should also be of interest to readers in other countries who would like to learn a little about Africa's amazing people and cultures. Similarly, although it is a true-life-story this tale does not revolve upon the depressing issues that we read about in the news every day and to which we may have become desensitised. Likewise, unlike many of the sailing accounts I have read, it does not dwell upon aspects of sailing that are meaningless to the average person and especially so to me, who is branded a heretic by many sailors when I tell them;

Sailing is the price I reluctantly pay for the time I enjoy anchored safely in a new port.

Finally, although I vowed at the time that I would never own another boat, I currently find myself building another one, twenty years later, together with my now grown-up family. Although we have yet to set sail, our journey has already begun anew.