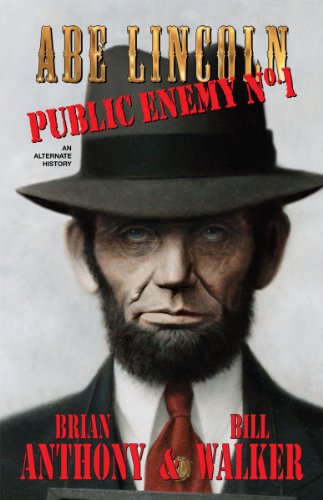 about this book: What if Abraham Lincoln had not died from John Wilkes Booth's bullet? What if that fateful bullet, cursed by voodoo priest at the superstitious actor's request, had instead placed the fallen president into a mysterious coma that keeps him limber and ageless? Would the government rejoice in their great leader's miraculous survival, or would they hide him away, desperate to keep Lincoln's existence a secret? And when Lincoln finally awakens in 1933, after sixty-eight years, is he welcomed as a savior or reviled as an antiquated relic of a time gone by?

"Abe Lincoln: Public Enemy No. 1" is a fast-paced, paranormal alternate history placing our sixteenth president into heart of the Great Depression, a situation pitting him against the likes of President Roosevelt, who sees Lincoln as an existential threat to his administration, and J. Edgar Hoover, who wants nothing more than to make Lincoln vanish back into history.

Knowing he has little choice, Lincoln escapes Hoover's grasp, accidentally killing a federal agent. Now an unwitting fugitive, Lincoln only wants to retrieve the monies left in trust for him by his long-dead son and disappear. But Hoover is one step ahead, and confiscates the former president's funds.

Destitute, Lincoln finds his way to a hobo camp in Chicago where he befriends Charley, a young runaway. Together they hit the road, hoping to find the reasons for Lincoln's continued existence and the tranquility he craves. But fate takes a stranger turn when notorious bank robber John Dillinger takes Lincoln and Charley hostage. Dillinger takes a liking to Lincoln and invites him to join his gang, promising he'll get all his money back.

Will Lincoln survive long enough to recapture his fortune and get away, or will he be hunted down in a manner unbefitting a martyred President?

"Abe Lincoln: Public Enemy No. 1" answers these questions and more in an entertaining page-turner you won't want to miss!

"It was impossible for me to put down Bill Walker and Brian Anthony's amazing 'Abe Lincoln: Public Enemy No. 1.' A truly fantastic read, and I am quite certain that it will make a tremendous motion picture." —Honorary Academy Award Winning Filmmaker Roger Corman

"Old Abe is alive and well in our time thanks to the imagination and writing skills of authors Bill Walker & Brian Anthony. As a huge Lincoln fan, I couldn't be happier to join our 16th president on such an entertaining adventure!" —Jordan Rich, WBZ CBS Radio Boston

"Clever and swiftly moving, yet with surprising attention to historical detail, 'Abe Lincoln: Public Enemy No. 1' is an intricate and engaging work of popular fiction that should satisfy a wide audience." —Foreword Clarion Review