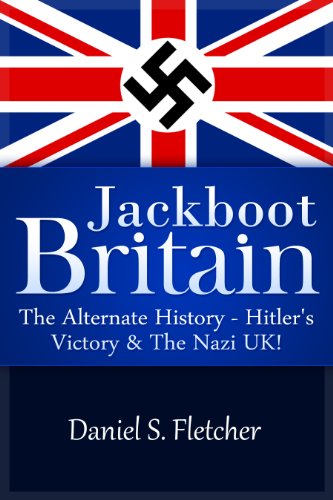 about this book: Jackboot Britain is the nightmare depiction of Nazi dystopia that never was - a Hitler victory in 1940 and the occupation of a conquered Britain!

The book follows a diverse range of characters; from Wehrmacht soldiers of the occupational forces - willing and unwilling alike - to the captured troops of the British Expeditionary Force, now held as prisoners of war in the charge of Major Wolf and the Waffen-SS; a group of auxiliary partisans of the British resistance, anti-fascist fighters and veterans of the Spanish Civil War; a young Jewish teacher in Leeds, and the encroachment of Hitler's anti-Semitic policy; Simon, a libertarian journalist; Bill Wilson, a monosyllabic alcoholic whiling away his time in a Bloomsbury pub, seeing the world through the narrow horizons of his drunken haze; the men in feldgrau charged with stabilising the defeated country; the men of the SS Einsatzgruppen, or "action groups", whose odious "police duties" entailed "anti-partisan measures" - the accepted euphemism for mass-murder - and of course, their mastermind, one of most vilified psychopaths in the annals of 20th century warfare and politics in SS and Security Police general Reinhard Heydrich.

Jackboot Britain looks at the destruction and suffering inflicted on the world due to war, prejudice and the hunger for power.