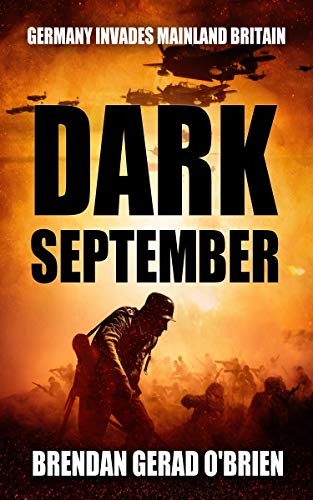 about this book: Dark September is a fast paced alternate history thriller set in Wales during WW2. It touches on the desperation and raw fear of ordinary people trying to survive against odds that are definitely not in their favour.

In the story Germany invades the UK. Soldiers pour ashore from warships in the Severn Channel, determined to secure the steelworks and the coal mines of South Wales.

Irishman Danny O'Shea is on his way to work in Newport Docks. His house is bombed and his wife is killed. His young son Adam, who nearly drowned when he was a baby, has severe learning difficulties. Terrified of what the Nazis will do to him, O'Shea resolves to take him to neutral Ireland.

Penniless and desperate, they head for Fishguard. But on an isolated Welsh road they witness an attack on a German convoy carrying the blueprints for an awesome new weapon that was discovered in a secret laboratory near Brecon.

German Captain Eric Weiss, responsible for the blueprint's safe transfer to Berlin, knows that his job - even his life - depends on him getting it back.

Suddenly O'Shea is separated from his son and catapulted into a world of betrayal and brutal double-cross. Pursued by both the Germans and the insurgents, his only concern is to find Adam and get him to safety.

One reviewer did think that the violence was too sudden and disturbing, but it only reflects the horror of the times and is not deliberately gratuitous.

The germ of the story has been in my head since the time I was in the Navy and we did exercises in the Brecon Beacons. I wondered what it would really be like to be running for your life through such inhospitable terrain with the bad guys determined to do you a serious injury if they caught you. But why would my character be running from anyone? What year should it be set in?

Later on I saw some disturbing footage of Nazis guards disposing of people with special need, and I felt tremendous sympathy for their families. How would I have react if I was in that position and Germany invaded the UK? Where would I take my child? Being Irish I felt it would be natural to gravitate to Ireland, which was neutral. And the chances were I'd still have some family there to go to.

Of course, once I'd started writing the story it took on a life of its own. Characters reacted in ways I never intended. People I created as decent characters turned into monsters half way through a chapter, even a sentence. It was exciting and disturbing all at the same time, and I enjoyed every moment of writing it.

I was concerned about making the leading nasty persons - two sisters - direct descendants of a treasured Welsh historical character. Initially they were beautiful, kind and loving girls but they were corrupted by both love and riches. But so far I haven't had any negative feedback about it. I would appreciate the views of my Welsh readers on that.

The original book was self-published as e-book and paperback via KDP on Amazon.