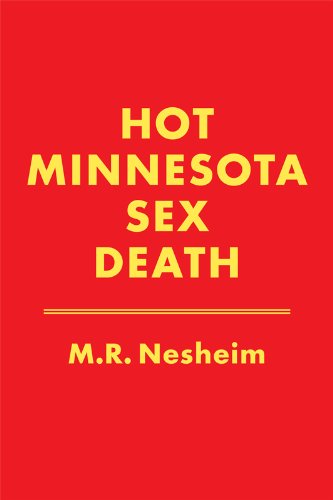 about this book: Hot Minnesota Sex Death is a humorous allegory depicting the recent financial crisis as told through the events and citizens of the remote town of Nede. A layered element of parable runs parallel to the allegory, comparing both the town and the financial crisis to the Fall of Man from the Garden of Eden. The inhabitants of Nede were sexually repressed until their leaders die in the act of forbidden sex, which causes the tightly wound town to spiral into moral and sexual chaos. Two brothers work to find answers in the ensuing maelstrom, hoping to find something before the town consumes itself in a fury of lust.

Hot Minnesota Sex Death was also written with the attempt of keeping the subject both light and irreverent, outlandish and poetic. Being his first novel, M. R. Nesheim, although familiar with dramatic structures, taught himself to write, as well as edit, in the novel form, learning many, many lessons along the way.

A novel is after all a work of art written in a fictitious prose narrative, but one must also remember that the word novel means new or unusual in an interesting way. And together Hot Minnesota Sex Death is that to end with the words of The Midwest Book Review's Editor, Diane Donovan - "If it's out-of-the-box thinking and writing that is desired in fiction and fantasy, one could do no better than to choose Hot Minnesota Sex Death: it radiates a quirky energy that keeps readers involved and guessing to the end".