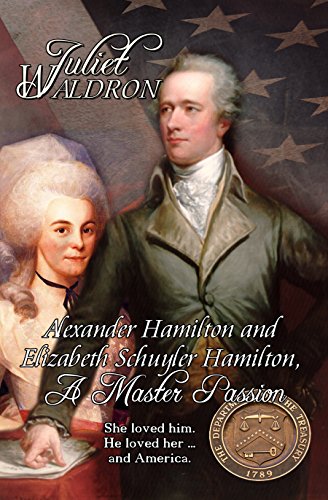 Book: A Master Passion, the story of Elizabeth and Alexander Hamilton by Juliet Vandiver Waldron

about this book: "...one Master Passion in the breast/like Aaron's serpent devours all the rest."
~Alexander Pope

This 18th Century poet was a favorite of schoolteachers. The hero of "A Master Passion," Alexander Hamilton, memorized his work during childhood. The quote describes Hamilton perfectly. His quest for heroic stature would eventually cost him his life. Before, however, he would rise from penniless, friendless orphan to one of the most powerful men in the new American republic. Born illegitimate, abandoned by his father and orphaned when his mother died, he went to work at the age of eleven. His masterful pen, his bravery as a soldier, his native intelligence and his high ideals would vault him into the illustrious company of America's Founding Fathers. Along the way, he won a wife from an old and influential family, despite the fact that he at the time merely one of George Washington's aides. Brilliant innovator in the fields of law, administration and in the fledging field of economics, he would, single-handedly, set the United States on a course to financial stability and eventual greatness.

Behind the hero was his adoring wife, a woman whose commitment to her husband lasted till the end of her life, fifty years after his fatal duel with Aaron Burr. Hamilton's "master passion" was for the kind of fame earned by the highest achievement. His Betsy's "master passion" was for her husband, whose children she would raise after his death, and whose reputation she guarded and endlessly defended.

I wanted to show Hamilton's genius in my novel, but I also wanted to do justice to his wife, for this was, in every way, an amazing partnership.

"As she did in "Mozart's Wife," "My Mozart," and (to a lesser extent) "Roan Rose," Juliet Waldron has created another exquisite piece of biofic about an extraordinary man and the extraordinary woman in his life."