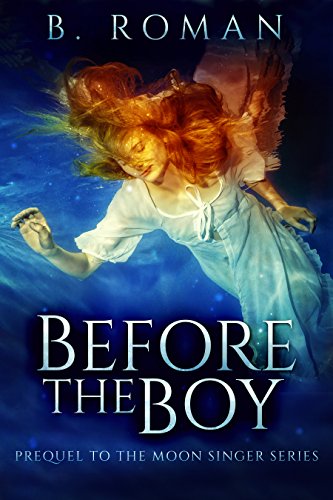 Book: Before The Boy - The Prequel To The Moon Singer Trilogy by B. Roman

about this book: This is a prequel to The Moon Singer books: The Crystal Clipper, The War Chamber, The Wind Rose. Those stories focus on David Nickerson's anger over his mother's death and his feelings of abandonment. He desperately tries to communicate with her through his crystals and his mystical time travel adventures. After writing those 3 books, I realized there was one important story that was not completely told: the story of David's mother. She is such an integral part of the Moon Singer books, and is David's primary focus as he deals with many other issues that plague his family. So I delicately pieced together her life story from her youth to her love affair with David's father and her untimely death in a car crash.

The first part of the book introduces Billie Donovan, her college years, her music talent, and her love affair with and marriage to Isaac Nickerson. This is a turbulent part of her life and fraught with dark spirits as she communes with Tarot card readers and mediums who predict...well I won't spoil it. Half of the book takes place in the Afterlife, from which Billie keeps trying to escape and get back to her family. I did a good bit of research on the afterlife, near-death experiences and related subjects to make it credible. Also, Billie is a gifted musician and I did some specific research on classical music pieces that she plays - and I describe - in her life before her death.

I was amazed in exploring all the amazing stories and writings about the Afterlife, how it differs from what we have heard and read, and just how much power spirits have over their own destiny. Of course, one must suspend all disbelief when reading about such things, and embrace the "Impossible" as "possible." So should readers who buy the book.