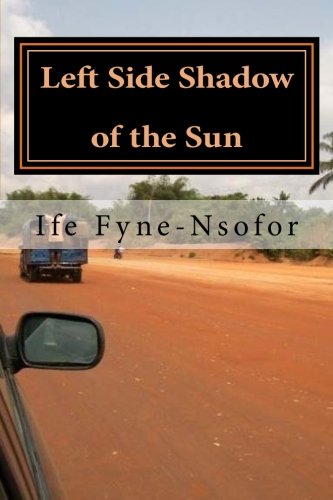 Book: Left Side Shadow of the Sun by Ife Fyne-Nsofor

about this book: I was 20 years old the first time I heard about it. Before then, of course I cared… what went on the world. The injustices, and the pains, and heartache in several parts of the world where I couldn't quite reach. I had my excuses like: I'm not old enough, successful enough, strong enough. What if I get in trouble? What if I get hurt?

I was coming out of the auditorium at my university when I saw the poster advertising a showing of documentary on child soldiers in Uganda.

I was 20 years old the first time I heard about the child soldiers of Uganda. 20. And that night, when it was done, I was born again.

I remember not believing it while I was watching it. I remember waiting for it to be over so that the credits would roll, and even though it would say it was based on a true story, I would suffice it to say that there had been a level of exaggeration and that it couldn't possibly be that bad. How can I live with myself if it were in fact that bad?

Then I cried. Uncontrollably. I was angry. I was angry at myself, at Kony, at Africa, at God, at whoever made that documentary for exposing the shame that was my living this faith I so righteously professed so conveniently.

Then God asked me, are you not an African?

I had that Moses at the red sea moment where he is frantically asking God to help. God asks him "Why are you crying to me? What is that you are holding in your hand? " With that rod, that simple wooden rod, Moses would become so much more than a shepherd and save a nation.

I didn't just want to tell yet another story that anybody had read. I didn't want to tell an impressive tale that tugged at you and then you put it down and move on with your life.

So I wrote. Then deleted it. Then wrote it again. Sometimes, I'd almost start to forget the despair of the very first time I'd made that promise. I'd look at them again, and I'd remember. I had Nancy, and Jacob, and Sarah, and Okello, and Gloria, and Anna, and Eliza. They went with me everywhere and they would whisper to me a story that went beyond the statistics, beyond the evening report, to human beings, to hearts, to souls, to breaths.

It is done now, I suppose… it had to be done sometime. I was surprised at how difficult I found myself in letting it go. I suppose in writing it I didn't realize that these children were becoming my family. These villages were becoming my villages. These parents were becoming my parents. But their story was bigger. It was meant to be told, to be heard, to be acted upon. It was my way of saying to them, I heard you, I felt you, I will never forget about you. I love you.

My name is Ife Fyne-Nsofor, and I am the author of Left Side Shadow of the Sun.