Book: Paul O'Leary - trouble on the farm by Michael Mardel

about this book: Meet up with Paul as he has two moves, from the city to a farm. Join him in his one room school and his extra chores on the farm, mowing lots of grass and training his dog, Lassie, not to chase the sheep. He has a few dream adventures, including being a fireman as a real bushfire approaches. Will he be able to cope with the blaze?

It’s a great big place where Paul ends up with his dog and his parents. Lassie has to be corralled or there’s double trouble and the rest if she gets out and chases the sheep. His Grandad is one of the trouble shooters and is not averse to protecting his sheep. Maybe he’ll take Lassie on as a real sheep dog. He found out that the sheep go into a huddle when they’re threatened and not because the dog rounds them up.

Once they had visitors and their dog found a snake. There was talk of trouble shooting but it slithered away. There’s five acres of garden to be mowed and trimmed and Paul’s Dad spends a few days each week keeping it in order. He has to paint the house, too, as previous tenants added to some wear and tear. In the evening he cooks and picks up Paul’s Mum from work more than ten miles away. Late in the evening he works his business of selling textbooks to Australian schools.

Paul rode his bike to his one room school and he read from his Kindle when he had finished his work. He once went to a school mates place but all he wanted to do was play games.

Because Paul had joined the Scouts in Broome in Western Australia, he wanted to sign up nearby at Romsey and renew his Scout’s honor. He had a few camps away with them to meet up with others and he also spent a night camping with his Dad by Deep Creek. The only problem was, it rained and they were soaked as they were a long way from Grandad’s house.

The last bit of trouble in paradise was a bushfire which are very extreme and some people leave their homes as they can’t defend them. Paul and his family decide to defend their two homes as Grandad had all the firefighting equipment. Will they survive? 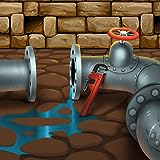