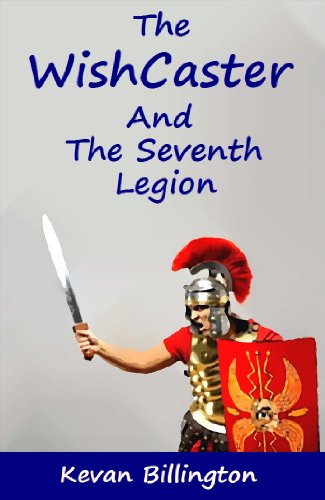 Book: The WishCaster and the Seventh Legion (Ben Mason - Book 1) by Kevan Billington

about this book: This is an adventure story for children and the young at heart.

Ben Mason is twelve and a half years old, though everyone thought he looks older (fifteen seemed to be the general consensus of opinion and Ben quite like that!). He is tall for his age and has an unruly shock of brown-blonde hair that refuses to stay neat and tidy no matter how much he combs it.

He lives just outside Stevenage, with his mother and father and two younger sisters. His dad works in finance and commutes into London every day and his mum is a part time secretary at a law firm in Stevenage.

Ben is in his second year at Abbot's Grove Comprehensive; a nineteen sixties pre-fabricated building that looks exactly like a hundred other schools in the county. He plays in the school cricket team; he is in the badminton league. Unlike most children his age, Ben isn't overly keen on computer games or games consoles; he much prefers reading, listening to music, playing sport or riding his bike.

He is a perfectly ordinary boy... except of course that he is, like his father and his father before him, a 'WishCaster'.

Despite what you might think, this doesn't mean that anything that Ben wishes for would come true... far from it in fact. He couldn't just hold out his arms and say: 'I wish a million pounds would fall from the sky!' (Well he could, but it wouldn't happen).

No, a WishCaster's life is far more complex than that. It is a gift (if gift it can be called) that has to be very carefully managed indeed

There are times in his life when the symptoms of this condition steel over him: he gets a headache, he can't concentrate and he feels oddly detached from reality. These are the times when he does everything he can to avoid making a Wish... or even the merest thought of a Wish! Because for Ben, Wishes can come true and, despite what you might think, this is not necessarily a good thing!

During a long and boring history lesson, Ben gets into trouble for not paying attention and has to stay back after class. As he is being told off though, Ben begins to feel ill. He recognises the symptoms and does his best not to think of anything, to let his mind go blank, but the teacher has a book open on his desk and Ben's eyes are drawn to the brightly coloured picture on display: it is of a Roman Century marching in precise columns across a verdant landscape; a blaze of silver, gold and red. Ben staggers and begins to fall; his teacher reaches out to catch him… and the world around them vanishes – despite his best efforts, Ben had made a Wish.

When Ben's teacher regains his senses he finds that both he and his pupil are dressed in the armour of Roman Legionaries and are marching amongst the Cohorts of the Seventh Legion during their first, ill-fated invasion of Britain in 55BC.

Convinced that he has lost his mind, or been stricken down by some sudden and debilitating illness, he refuses to accept the reality of their situation, and it is up to Ben, not only to keep his teacher safe, but to find a way of bringing this Wish to its natural conclusion. As the hours turn into days though, even Ben himself is beginning to doubt that they'll ever find their way back home.