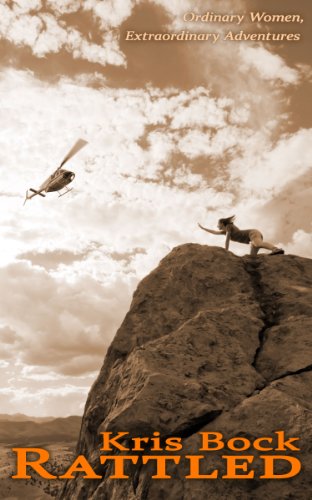 about this book: I love the Southwest, and I love the romance and mystery behind tales of buried treasure. When researching lost treasures of the American Southwest, I came across the story of the Victorio Peak treasure, which has it all – a heretic Spanish priest, bandits, an Apache raider, and of course lots of gold. Rattled was inspired by this tale.

In my book, quiet history professor Erin uncovers a clue to a lost treasure cave, but minutes after her discovery, a hit and run driver leaves her for dead. Drew, a handsome helicopter pilot, finds her bleeding in a ditch. Attracted to her rescuer, Erin wants to open up about the treasure and more, but can she trust him? The "accident" seems an unlikely coincidence, especially when followed by a series of break-ins and attacks. She's certain she's not the only one after the treasure. Is Drew a hero, or her enemy?

Erin won't give up an important historical find without a fight. She and her gorgeous and brainy best friend Camie head into the New Mexico wilderness to track the treasure. The wilderness holds its own dangers, from wild animals to even wilder weather. The pair races to find the treasure as sinister men hunt them. Erin must go forward no matter where the twisted trail leads, even if it means asking Drew for help and endangering her heart.

Readers have said:
• "The action never stopped ... It was adventure and romance at its best."
• "I couldn't put this book down. You'll love it."