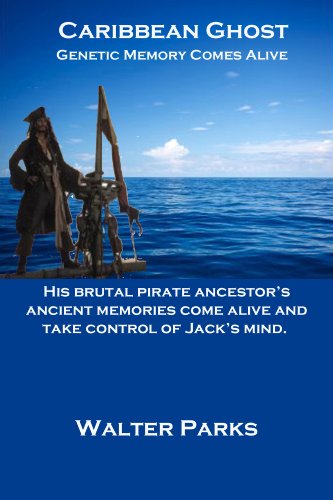 about this book: Matt always knew that his ancestor was a brutal pirate back in the 1600s. As a kid he would daydream about him. He always played the part of a pirate in all the games.

When his new girlfriend suggested that they take a vacation in the Caribbean he was anxious to go. He was especially motivated during the last few weeks because he could not get his old pirate ancestor out of his mind.

He seemed to have vivid images of him killing people and hiding treasure. Why are these visions becoming so vivid after all these years?

He rented a 46 foot yacht in south Florida and headed for the Caribbean.

When you are in the Caribbean sounds of romantic island music fill the senses. The visual scene is even more magnificent than the music.

The clear blue sky complements the blue-green sea to give a feeling of endless space.

Matt's rented sailing yacht is alone in the sea, racing towards a distant island. The brilliant colors of its billowing sails belie their tremendous force as they push the yacht across the rolling sea.

The bow slices through the blue-green water casting a sparkling spray of rainbow hews. The yacht speeds through the shallow waters towards the white sand beach of a palm shrouded island of primitive, timeless beauty.

It is a mesmerizing sight!

Matt is a handsome man in his mid-thirties and dressed in his bathing suit. He is indeed mesmerized. He stands on the foredeck and quietly stares at the unbelievable scene.

His face takes on a concentrated stare as he thinks of the pirates of old that use to sail these seas. He can almost hear the sounds of their times.

His girlfriend, Kim, a beautiful hard body type in her late twenties, dressed in her thong bikini, watches Matt from her control position at the boat's wheel. She knows that he loves this moment. She smiles.

As Kim watches Matt, the sounds of his daydream become clearer. Pirates are yelling as they prepare to anchor near the shore line. Matt can see Captain Jack, who looks a lot like Matt, commanding a crew of four pirates as they shove away from their pirate ship of the 1600's. They are in a dingy of old. A sixth pirate, Hawkins, seems to be second in command. There is a large treasure chest in the middle of the dingy.

Captain Jack speaks harshly to one of the crew: Move it!

The four crew members row towards the shore as Captain Jack stands with one foot on the treasure chest.

Hawkins moves closer and deliberately places a foot on the chest and stares at the Captain.

Hawkins: I don't want my part buried. I say split it up and let each man be responsible for his own.

Captain Jack responds with a snarl: And I say we bury it for protection.

The crew continues to row the dingy as they sneak glances at their rivaling leaders.

Captain Jack: And that's an order from your Captain.

They try to stare each other down.

Hawkins: I want my part now.

He moves his hand to the butt of the sword hanging at his side.

Another long stare; Hawkins is not going to back down.

The dingy hits the shore. Captain Jack falls forward into Hawkins. Hawkins reaches out to steady both of them.

The Captain grabs onto Hawkins and begins to laugh. He hugs Hawkins. Hawkins returns the hug and joins in the laugh.

Hawkins and Captain Jack continue to laugh as Hawkins steps out of the dingy. He turns to help the Captain.

His smile turns to shock as Captain Jack gives him an evil sneer.

Hawkins looks up at the Captain's sword raised high above his head. Hawkins' hand moves towards his own sword.

The Captain swings down hard with his sword. Hawkins' hand and part of his forearm is sliced away.

Hawkins looks at his hand and arm as it falls into the sea. He looks back to the Captain. Then before Hawkins can move, Captain Jack shoves his sword into Hawkins' heart.

They stare at each other for another moment before Hawkins falls lifeless into the water.

A ghostly looking woman in a white flowing gown moves up behind Captain Jack.

Captain Jack twirls around towards the ghostly woman ...

The spell of the daydream is broken.

Matt grunts a half laugh: Yeah...