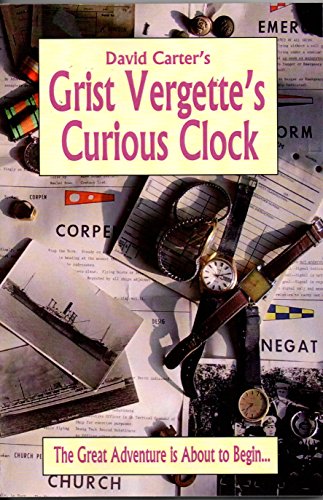 Book: Grist Vergette's Curious Clock - The Great Adventure is About to Begin... by David Carter

about this book: Fifteen-year-old Johnny Vergette is repairing an old motorbike in the garage when his mother calls him back into the house.

Grist Vergette, his grandfather, recently passed away, and Johnny's inheritance has finally arrived in the mail. It's a large and very impressive key. The key to Grist's old garden shed down on the allotments.

Johnny's parents ask him to go down there right now and see what awaits him. He shrugs his shoulders and grins and reluctantly agrees, and goes outside where he meets Serilda Strecker, the German neighbour's daughter, who was just coming home from having her photograph taken, and that explains why she is dressed up and looking cute and smart, and after a brief conversation, the two of them set off in the sunshine on the ten minute walk to the allotments.

They find the shed tucked away in the far corner of the site; but it is not like other garden sheds. It is bigger and better built and immaculately maintained. Johnny slips the large key into the lock and it turns over as if it were made yesterday. They expect to find garden tools and mowing machines and bags of old seed, and there are some there too, but they are pushed away into one corner, as if gardening was of little interest to old Grist.

They do find a myriad of interesting artefacts, almost all dating back to World War II. Medals, plans, model ships, Morse code equipment, dusty old TOP SECRET plans and files, convoy plotters, old money, piles of vintage engineering magazines, fascinating photographs of people in uniform, some of a handsome and smirking Grist as a young man, in navy uniform, and his beautiful wife too, and more photos of old warships and merchant ships, and an old travelling clock that doesn't appear to work.

Johnny tosses it disdainfully onto the workbench and continues mooching through his newly acquired possessions, much to Seri's amusement. 'Is this an old English custom?' she teases. 'The grandfather leaving the key to his garden shed to the grandson?'

Johnny shrugs his shoulders and can but smile. 'It is weird,' he says, and glances around again, for clearly the main purpose of this shed is not for gardening, but what is it for?

The alarm on the old clock goes off; surprising them both, and it folds back in on itself and closes with a slick click. It begins to pulse. Vum! Vum! Vum! Louder and louder. Johnny and Seri stare at it, entranced. The face on the clock begins revolving, and starts to glint like gold.

Something very strange is happening. Johnny and Seri can't take their eyes from the pulsing dial. They begin to feel dizzy. Seri reaches across and faints, and falls into Johnny's arms. Johnny is dizzy too. His eyes are closing, his body growing weaker. Neither of them can know the great adventure is about to begin.

Grist Vergette's Curious Clock has claimed its first victims, but what will become of them?