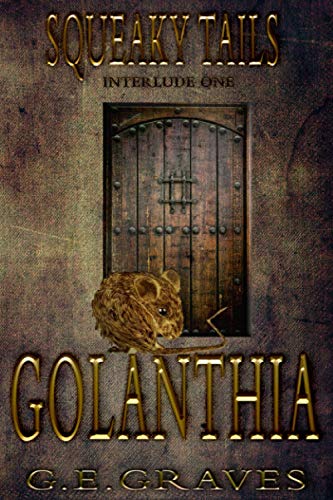 about this book: Squeaky Tails – Crusaders of Golanthia, is a wonderful saga for all ages. The book discusses contrasting concepts of good and evil – right and wrong – which may not be easily understood. Trust and friendship may seem obvious. However, moving from one unsought adventure to another, our crusaders discover that this is not always so. One learns that appearances are not always as they seem. That friendship can magically happen in the most unexpected way. As one grows, like the critters do throughout the book, the past is always there to help balance the present. This combination helps form a newly designed image of what we thought we knew. By the end of the tail, it is possible that one may not ever be the same.

Throughout the book, it's easy to laugh, smile, appreciating old friends and family that are no longer around. Tears may come, thinking of parents, teachers, and instructors whose advice is now so clear. There are times where memories aid when least expected. Understanding is half the battle when moving ahead. However, it's important to follow one's heart as well as one's head. While reading the story and comparing views of the world, similarities surprisingly begin to mount, as one falls under the critters' spell.

The characters, "the critters" were not designed. They evolved, as the story evolved. Writing one line following another, actually being each critter, they all blossomed and formed into strong primary characters. I have been told that from early in the story it's difficult to envision them as animals; they become beloved little critters. Retaining their individual behaviors, each grow and develop though their unanticipated experiences and evolve into more than expected.

Inspiration for the book:

I have always been a reader, writer, and storyteller, it comes natural to me. When discussing the limited and not quite up to par stories with a friend, I began building a world for her grand kids. Through the process, the journey, I became more aware of how differently the simplest things can be viewed. Life is built upon experiences. Often, what was once thought understood soon becomes less clear. The book became a world filled with my critters learning the importance of how living is more than simple continuation.

Through years of writing, editing, proofing, I have learnt more than thought possible. This is yet another example of how one learns from actual participation. This concept of not knowing all there is to know spreads throughout the story. Nothing can substitute for experience. Writing is not to replace life and living, it is to enhance it.

The actual writing was not difficult. In fact, it was extremely enjoyable. The story practically wrote itself one sentence at a time. I remember sitting back after a writing session and being surprised at what happened. More often than not, I would spend hours writing simply to see what was going to happen next! Slowly, the story developed into a great deal more that I would have anticipated.

With the project's advancement, I discovered that there is more than I realized in shaping a story into a book. The most difficult part was taking a story that was emailed piece meal to a friend and organizing it into a coherent document. Editing, the thought of which makes me cringe, was a most strenuous act of will. However, it had to be accomplished. Pressing ahead, painfully going over each word, each paragraph, it eventually cleaned up into an impressive manuscript. Had I realized the required effort of shaping and forming a story into a book, I may not have started. However, not one to leave anything undone, I fought through the project and created the Crusaders of Golanthia. A world where anything is possible!

The term "Golanthia" was derived from the idea of creating a world. This thought of a world – the all encompassing unknown forces - was come across later, as the writing grew beyond the imagined. Now, thinking back, it is difficult to remember a time without Golanthia or the critters. It was nearly magical watching it take shape and structure. I remain amazed every time I read the book or remember all that went into the project.

Through the adventures and challenges of creating the story, there have been many that have aided in the quest. Whether sought or unsought, many have added to the entire venture. Through the process, I began to consider them "The Crusaders". Therefore, when designing the title, I decided to pay homage to "My Crusaders" by combining them with the story.

The cover design, by no means a simple matter, was yet another venture into the unknown. Through an evolutionary process, I began considering the theme, the storyline, and my possible readers. After Combing elements of the story, and after hundreds and hundreds of different ideas, I finally settled upon the final version. I believe I have hit my target, creating an image that is mysterious, appealing and informative. My hope is that "you", my reader, will enjoy the cover, the story, and inspirational characters.