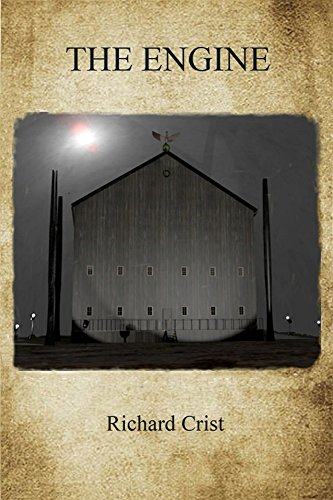 Book: The Engine by Richard Crist

about this book: Returning to his childhood home, Dr. Robert Bennett rediscovers an enigmatic artifact that had sparked his imagination when he was a boy. Now, as an accomplished archaeologist, and once again intrigued by the object, he reinvestigates the rocky ledge where all those years ago he'd found the artifact, and makes a discovery that can change the world. He soon finds himself swept up in an adventure that takes him to the ends of the earth, pitting him against an insidious enemy and presenting him with awe-inspiring intellectual challenges.

My book is an archaeological adventure novel, with some romance, but it's also a philosophical novel, and contains actual lessons in logic, ethics and aesthetics (I have a Ph.D. in philosophy from the CUNY Graduate Center in New York City and have taught at Hunter College and City College in NYC, and at Ulster County Community College in upstate New York). The book is meant not only to be a good read, but also to serve as an introduction to my Truth Engine, which promotes a unique method of debate—I see debate as an important way that society thinks collectively, and the Truth Engine as providing the most powerful method of debate. There's also a science fiction component in the book: I spell out, in a fictional context, my views on UFOs: what flying saucers are and why they are here. The main surprise in the book, I think, is what the UFOs have to do with the Truth Engine.

There are 89 full-color illustrations. I created the illustrations in The Engine using the 3D graphics programs SketchUp and Blender. (And I wrote a book on how to use Blender, called Blender Steps.) The first incarnation of The Engine was a browser-based video game I developed, and many of the book's illustrations had their origin in that game.

For years I was a science fiction illustrator for Analog and Asimov's magazines.

I see the primary readers of my book as those who enjoy a good adventure story. And I see them as being intelligent, analytical-minded, and having an active interest in reason, morals and art.

In the book, Robert explores ancient buildings whose architectural design incorporates mysterious symbolic elements. These are elements that I developed over many years—since I was a boy, actually. Over the years, I realized more and more clearly how these buildings' symbolic structures might be made to correlate with the complex structures of the Truth Engine, a device that emerged as the result my philosophical investigations into collective intelligence. I found that, eventually, both streams of thought, the intuitive and the discursive, came together easily for me, as if I had been unconsciously working on both together as a single project. I estimate that the actual writing of the book took two years, with editing and polishing taking perhaps another year.

The most difficult part of writing the book, by far, was the task of fitting together the logical, analytical parts—the "lessons"—with the expressive story-line. Some sections of the book went through many drafts, but I feel the lessons have now been seamlessly integrated into the narrative.

I chose to put an image of the house of Kholoruuf on the cover because this picture, which I created in Blender, conveys a sense of mystery. I think the image also connects with dream imagery, the house often symbolizing mind in dreams. Mystery evokes the desire for knowledge, a product of mind—I believe that the image, again, joins together the intuitive and the discursive.